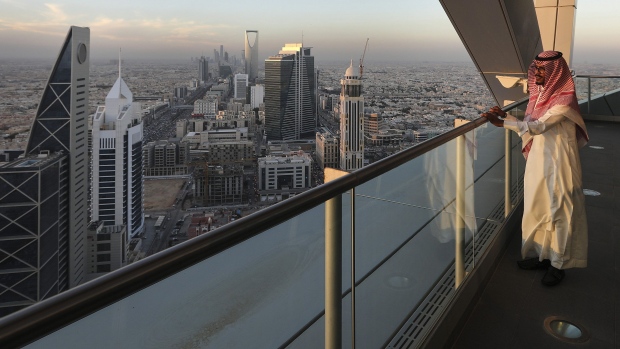 An employee looks out from the 32nd floor viewing platform of the Al Faisaliah Tower, as skyscrapers and commercial buildings stand beyond, in Riyadh, Saudi Arabia, on Thursday, Dec. 1, 2016. Saudi Arabia is working to reduce the Middle Easts biggest economys reliance on oil, which provides three-quarters of government revenue, as part of a plan for the biggest economic shakeup since the countrys founding. , Bloomberg

Canada’s export financing agency has lifted its suspension on Saudi Arabia-related activity, citing an improving environment for the nation’s businesses since a diplomatic blowout with the kingdom last summer.

Export Development Canada its position on Saudi Arabia on Tuesday from “off cover” to “open on restricted basis,” ending a 10-month halt on business. The EDC move to suspend business in the country came after the Saudi government put its own freeze on any new deals for Canadian firms.

“EDC has now made the decision, based on our monitoring, that business conditions in the Kingdom of Saudi Arabia have improved to a point where we can again start considering support for Canadian companies exporting to the market,” spokeswoman Amy Minsky said by email. “We believe there are opportunities for Canadian companies” in the country, she said, “and we don’t want to preemptively close the door to them.”

The move highlights an easing of tensions between the two countries since a diplomatic feud erupted last summer after a tweet by Foreign Minister Chrystia Freeland criticized the arrest of a Saudi women’s rights activist. In response, Saudi Arabia lambasted Canada for interfering in its domestic affairs, expelled the Canadian ambassador to Riyadh and ordered a freeze on new investment.

Before the incident, EDC had rated Saudi Arabia as open for business with a low risk of political interference. It’s current “restricted” status means that “we recognize there are risks, but are open to assessing transactions on a case-by-case basis to verify whether each meets our requirements for sustainable and responsible business,” Minsky said.

At the time of Freeland’s tweet, EDC had exposure of about $2 billion to Saudi Arabia, and about 250 customers operating in the kingdom.