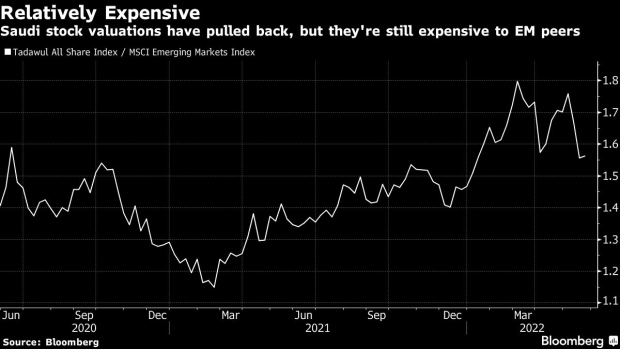 Stocks listed in Saudi Arabia are poised for their worst month since the start of the pandemic as investors succumb to global risk-off sentiment amid recession fears.

The benchmark Tadawul All Share Index has declined 10% in May, nearly twice as much as the MSCI Emerging Markets gauge, and on track for its biggest monthly slide since March 2020. Banks accounted for the biggest drag as investors offloaded lenders with lofty valuations during a global equities correction.

“Investors are taking money off the table looking at the strong bout of selling in the international market,” said Faisal Hasan, chief investment officer at Al Mal Capital in Dubai. Still, the economic backdrop in the kingdom should stay strong as oil prices remain elevated and the second half of the year could provide some reprieve to Saudi shares, he said.

Even after the selloff, the Saudi stock index is the eighth-best performer in the world this year, in US dollar terms. Investors had flocked to the kingdom’s shares as its economy got a boost from soaring oil prices and government reforms.

Saudi stocks are not immune to the global selloff as the largest local investors run global portfolios, according to Hasnain Malik, a strategist at Tellimer in Dubai. “Valuation has reached a point where it is expensive versus history. That makes them vulnerable to any concerns on global oil demand,” he said.

Concerns over global economic prospects due to high inflation and increasingly tight monetary policies helped push crude prices down 11% from a peak in March.

Despite the recent selloff, Saudi stocks still trade at a 56% premium -- based on forward price-to-earnings calculations -- compared with the MSCI EM Index.

Since March 2020, the Tadawul index has advanced during 22 out of 25 months and could soon return to its uptrend. Morgan Stanley analysts, including Henrik Herbst and Marina Zavolock, expect more foreign inflows in the fall as the country’s weighting in global indexes increases amid new company listings and growing free floats, they wrote this week.