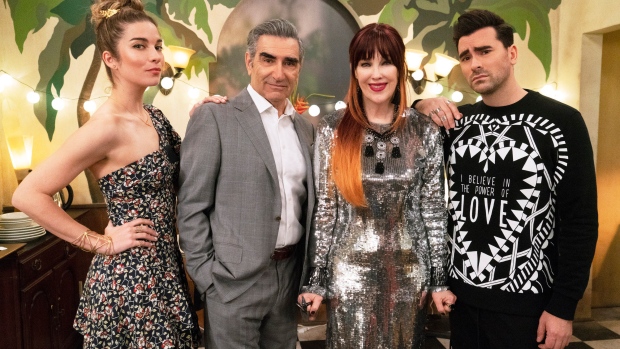 When TV location scouts want a house to suggest fabulous wealth, it’s hard to do better than one that looks like a 17th century French palace. And with its frescoed ceilings, crystal chandeliers, marble staircase, and grand domed cupola, that’s exactly the look Van Lapoyan was going for when he built his Toronto mansion.

The 24,000-square-foot residence has more than 25 film and television credits to its name, including the multi-Emmy Award- and Golden Globe-winning comedy series Schitt’s Creek, where it was glimpsed as the Rose family’s abode before they lost their fortune and were forced into the show’s eponymous rural backwater. Now Lapoyan has put his mansion up for sale with an asking price of $19.9 million (US$15.7 million).

Having spent the first part of his career in Toronto’s construction industry, building custom homes for other people, the condo-developer decided in 2008 he’d build a dream house for himself on a lot in the city’s North York neighborhood, at 30 Fifeshire Rd. It’s near the exclusive Bridle Path area where the rapper Drake has a Toronto manor.

Designing the place took two years, plus three in construction to get everything exactly the way Lapoyan wanted, from the home theater to the two pools (indoor and outdoor), the golf simulator, and the wine cellar. Trickiest was the three-story structure’s outer facade and patio, which he insisted be made of limestone brought from Indiana and inserted with marble that had to be lifted into place with cranes.

Now the 67-year-old is planning to retire someplace that lacks Toronto’s frigid winters, and he says the 12-bedroom, 16-bathroom house is too big for just him and his wife. Having lived in it for only seven years, Lapoyan admits he built it in part just to prove he could.

“It was a challenge for myself in terms of how can I achieve it. Can you do it? Can you make something beautiful and enjoy it?” Lapoyan says in a telephone interview. “It is a landmark, everyone knows it’s a landmark. They come everyday to take pictures of the house. During construction, I had a lot accidents in front of it because drivers were all just looking at the house instead of the road.”

Lapoyan first fell in love with the baroque, rococo, and neoclassical styles of architecture that influenced his home while a university student in Paris. In keeping with the monumental aspirations of that period, he christened his home “La Belle Maison” in a marble panel set into the balcony above the front door.

“When I was a student in Paris, I used to walk on the streets and just be amazed by these beautiful buildings,” he says. “I’d be walking up the street, and then I’d hit a pole because I was watching the buildings and how beautiful they were.”

And though the classical-bas reliefs, Tuscan columns, and marble balustrades of his home’s interior may suggest Marie Antoinette-levels of decadence to some filmmakers and TV location managers, for Lapoyan they are timeless architectural elements, especially compared to more modern styles he dismisses as faddish.

“Modern houses today are very in vogue, and people like it, but classical houses never go out of fashion,” he says. “Whether it’s now or in 10 years or in 50 years, you’re still going to love that house.”

The house’s size meant Lapoyan barely noticed film crews when they were shooting in it, even when they worked late into the night. He says he didn’t see much of the Schitt’s Creek team when they were there, except when he stopped by to shake star Eugene Levy’s hand.

Although the Canadian series premiered in 2015, international audiences searching for something to binge watch amid pandemic lockdowns helped turn it into a sensation last year. The show’s final season went on to sweep all seven major comedy categories at the Emmy Awards, setting a record for most wins by a comedy. The winning streak continued at the Golden Globes Sunday night, bagging the award for best TV comedy series along with the best actress statue for star Catherine O’Hara.

Lapoyan says the series’ success has brought increased attention to his house, which has been on and off the market since 2019, when it was first listed for $21.8 million.

“All of a sudden, we received a huge amount of interest because of Schitt’s Creek, and we’ve been bombarded with phone calls and emails,” he said. “We used to get local interest. Now we get interest from Vancouver, from Montreal, from London, from New York—all over the place.”

For fans with a more modest budget the small town motel where the Rose family spends most of the series is also up for sale, with a sticker price of just $2 million.