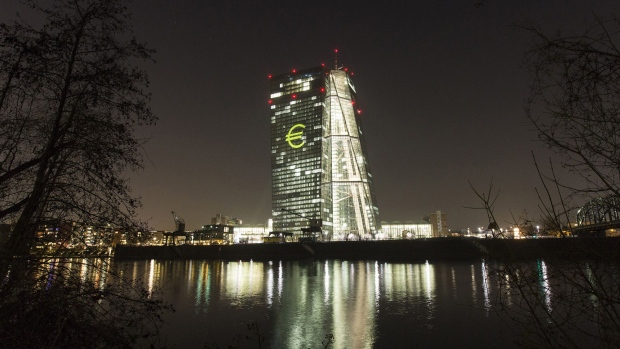 An illuminated euro currency symbol is projected on to the European Central Bank (ECB) headquarters during the Luminale light festival in Frankfurt. , Photographer: Martin Leissl/Bloomberg

Isabel Schnabel and Fabio Panetta moved closer to securing seats on the European Central Bank’s Executive Board after winning endorsements from lawmakers.

The European Parliament’s Committee on Economic and Monetary Affairs approved Schnabel, an economics professor at the University of Bonn, and Italian central-bank official Panetta following their hearings on Tuesday. The vote only serves as a recommendation, before national governments sign off on the two appointments by the end of the year.

“Both candidates are qualified to become members of the ECB’s Executive Board and have performed well during the hearing,” said Markus Ferber, a German lawmaker on the committee.

Schnabel and Panetta are set to join the ECB as it prepares to launch a review of its policy strategy, after a decision in September to cut interest rates and restart quantitative easing triggered unprecedented opposition in the Governing Council.

Schnabel said on Tuesday she would probably have opposed fresh asset purchases. Panetta said the ECB should be alert to potentially detrimental side effects of negative rates.

To contact the reporters on this story: Piotr Skolimowski in Frankfurt at pskolimowski@bloomberg.net;Alexander Weber in Brussels at aweber45@bloomberg.net