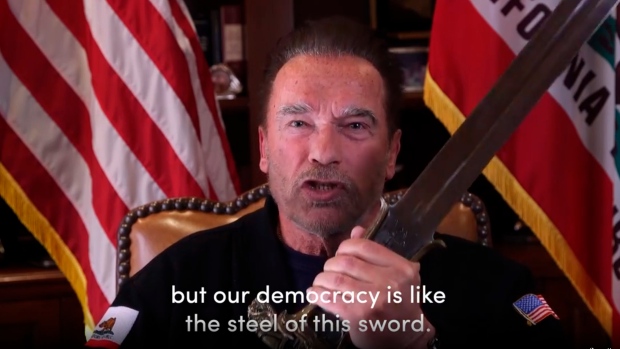 This Sunday, Jan. 10, 2021, image from a video released by Schwarzenegger shows former Republican California Gov. Arnold Schwarzenegger delivering a public message. Schwarzenegger compared the mob that stormed the U.S. Capitol to the Nazis and called President Donald Trump a failed leader who “will go down in history as the worst president ever.” , The Associated Press

Arnold Schwarzenegger called for those responsible for the violent protest at the U.S. Capitol to be held accountable, while reminding viewers that America grows stronger in the midst of trial.

The action-film star slammed President Donald Trump and compared last week’s storming of the Capitol by Trump supporters to Kristallnacht, when Jewish people in Germany and Austria were killed and their businesses ransacked in a Nazi rampage in 1938.

“I grew up in Austria. I’m very aware of Kristallnacht, or the Night of Broken Glass,” said Schwarzenegger, a naturalized U.S. citizen who served two terms as Republican governor of California.

My message to my fellow Americans and friends around the world following this week's attack on the Capitol. pic.twitter.com/blOy35LWJ5

The seven-minute video posted on Twitter garnered over 14 million views within eight hours of its upload and has since exceeded 15 million.

The message was the latest from prominent Republican Party members distancing themselves from Trump, who the former governor said “sought a coup by misleading people with lies.”

“The good thing is he will soon be as irrelevant as an old tweet,” Schwarzenegger said.

Schwarzenegger, 73, called for unity and support for Joe Biden’s upcoming presidency. Biden’s success is the nation’s success, Schwarzenegger said, a sentiment that has been “liked” more than 600,000 times so far.