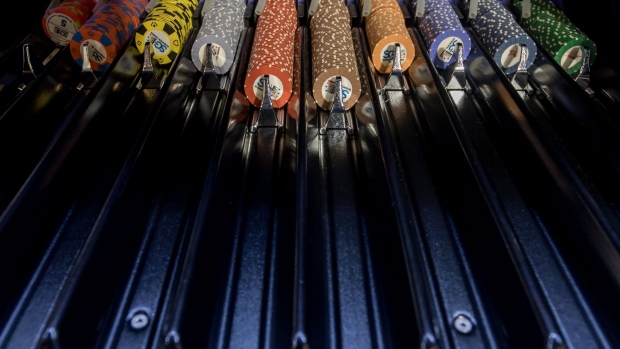 Scientific Games Corp. gaming chips sit on a table during the Global Gaming Expo Asia (G2E Asia) in Macau, China, on Tuesday, May 21, 2019. The expo runs through May 23. Photographer: Paul Yeung/Bloomberg , Bloomberg

Scientific Games has been in discussions with private equity firms about a potential sale of the lotteries unit, said the people, who asked not to be identified because the information was private. The Las Vegas-based company is also considering a stock listing in Australia, Bloomberg News reported this week.

The division could have a value of up to $7.5 billion, including debt, in an initial public offering, one of the people said. It’s unclear how much the private equity firms are bidding. A final decision on a sale hasn’t been made and Scientific Games could still decide to keep the unit, the people said.

Representatives for Scientific Games, Brookfield and Apollo declined to comment.

In a June statement, Scientific Games said it was exploring divesting its lotteries and sports-betting units via a merger with a special purpose acquisition company, a sale or a strategic combination with another business, as part of a process to rein in debt. Later, it agreed to sell its sports gambling company OpenBet to Endeavor Group Holdings Inc. for $1.2 billion in cash and stock.