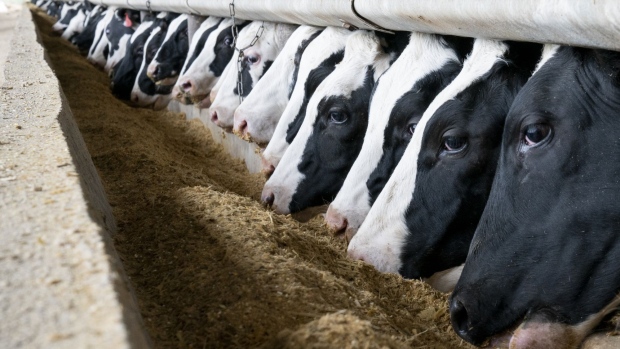 A toilet-training program designed to help treat cow urine in a more sustainable way could help minimize the environmental impact of toxic substances produced by the waste.

While discussion of the climate effects from the meat and dairy industries has largely focused on methane emissions from cattle, cow urine is another area of concern for both air and land health, according to scientists from the University of Auckland and the Leibniz Institute for Farm Animal Biology in Germany who designed the new program.

Cow urine has a high concentration of nitrate, a substance that, as it breaks down in contact with soil, leads to land contamination and pollution of nearby waterways if not managed properly. It also produces nitrous oxide, a greenhouse gas 300 times more potent than carbon dioxide. Combined with feces, the mixture creates ammonia, another contributor to toxic emissions.

The toilet-training program for calves is not dissimilar to how young children are potty-trained, according to the scientists. In a trial of 16 cows, researchers rewarded the animals with food when they successfully urinated in a specific latrine pen, called a “MooLoo.” However, if the cattle let go too early, they were squirted with cold water.

The scaling up of the program could reduce harmful urine patches in paddocks and barns, the researchers said.

“If we could collect 10 per cent or 20 per cent of urinations, it would be sufficient to reduce greenhouse gas emissions and nitrate leaching significantly,” said Douglas Elliffe, a professor of psychology at the University of Auckland who helped design the program. “We’ve shown proof of concept that we can train cows and train them easily.”

It’s not the first attempt to train the urination habits of cows, but the results of this study were more conclusive, the researchers said. After 15 days of training, three-quarters of the calves learned the full set of skills within 20 to 25 urinations. That’s faster than the time it takes for the average toddler to pick up the habit, the scientists said in the report, which has been published in scientific journal Cell Biology.

“This is very exciting because it means they were paying attention to their bladder getting fuller,” said Lindsay Matthews, an academic who has specialized in the learning preferences of cattle and was also involved in the experiment.

The meat and dairy industries are facing challenges from alternative-protein sources such as faux-meat and plant-based milks, as consumers increasingly make choices based on environmental and health concerns. As such, cows have been at the center of some of the more innovative experiments aimed at making them greener, including kombucha cocktails to reduce cows’ methane emissions and burp masks that capture gases.

The researchers say that the New Zealand dairy industry has already shown interest in the MooLoo, as the country’s farmers prepare for an emissions trading scheme that’s set to take effect across the agricultural sector in 2025. The scheme could see farm emissions taxed if sufficient progress hasn’t been achieved to improve the industry’s green credentials.

The scientists said that the findings could be further applied to extract and reuse nutrients, such as nitrogen and phosphorus, from the collected cow urine.

“This is new science, what we’ve done here, so there are many ways to push it,” said Matthews.