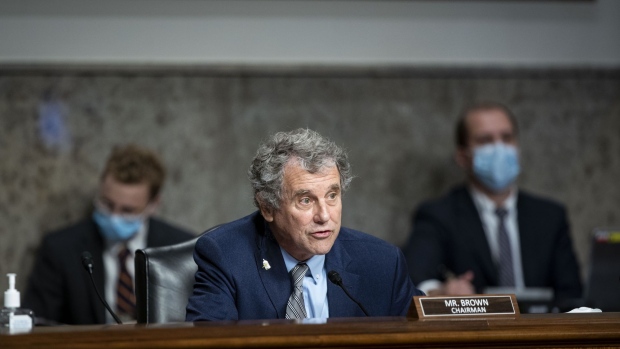 Senator Sherrod Brown, a Democrat from Ohio and chairman of the Senate Banking, Housing, and Urban Affairs Committee, speaks during a hearing in Washington, D.C., U.S., on Tuesday, Nov. 30, 2021. The Federal Reserve chair, in his first public remarks on the omicron variant of the coronavirus, said it poses risks to both sides of the central bank's mandate to achieve stable prices and maximum employment. , Bloomberg

(Bloomberg) -- Senate Banking Chair Sherrod Brown said hearings on President Joe Biden’s nominees for the Federal Reserve, including three not yet named, will probably be held in January.

Brown had previously said he was considering hearings for Fed Chair Jerome Powell, who has been renominated for the job by Biden, and for Lael Brainard as vice chair as early as this month.

Biden has three other positions to fill on the seven-member Fed board, including the pivotal vice chair for supervision slot previously held by Randal Quarles.