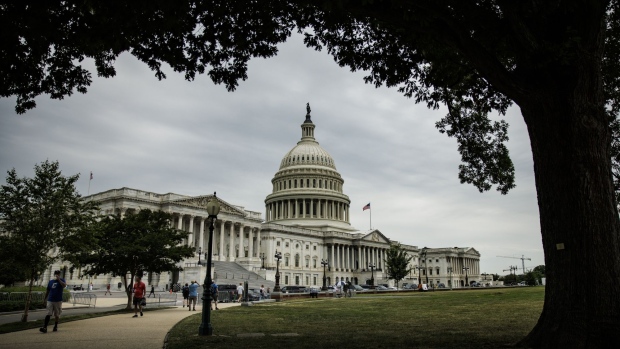 (Bloomberg) -- The Senate passed a stopgap funding bill on a 72-25 vote, sending it to the House on the eve of the deadline to avert a shutdown of most government agencies.

Despite opposition to the measure from House Republicans, that chamber is expected to pass the bill before the Saturday start to the new fiscal year, allowing lawmakers to return to their districts to campaign ahead of the midterm elections.

The vote in the House is expected to be close, with House GOP leader Kevin McCarthy urging all his members to vote down the measure in favor of a stopgap that extends into next year. Republicans hope to control Congress and pursue a series of budget cuts -- including to the Internal Revenue Service -- in the final 2023 spending bills. House Democrats are expected to unite behind the Dec. 16 stopgap, however, leaving Republicans on the sidelines for now.

Senate Republicans split on the bill, with 25 voting to oppose it.

Senator Mike Rounds, a South Dakota Republican voted against the bill to protest the practice of using short-term stopgaps, which has become an annual event in Congress.

“We’ve got to stop kicking the can down the road and do our jobs. Stop with the elective activities and focus on the core curriculum,” Rounds said.

Republican opposition forecasts potential turmoil in December, especially if Republicans retake either the House or the Senate in the election, as is likely.

“Running on autopilot in the face of rising inflation would be irresponsible,” he said.

The path was cleared for passage of the stopgap bill after Senate Majority Leader Chuck Schumer and West Virginia Democrat Joe Manchin dropped an effort to include permitting changes in the bill. Manchin was unable to assemble 60 votes for his energy permit changes in the face of opposition in both parties.

Also excluded from the bill at the request of Republicans was $27 billion in funding requested by the White House to fight Covid-19 and the monkey-pox outbreak.

A stopgap measure is needed to keep the government running past the Oct. 1 start of the fiscal year because Congress has failed to pass any of the 12 annual spending bills for fiscal 2023. The House passed six bills and the Senate took up none of them.