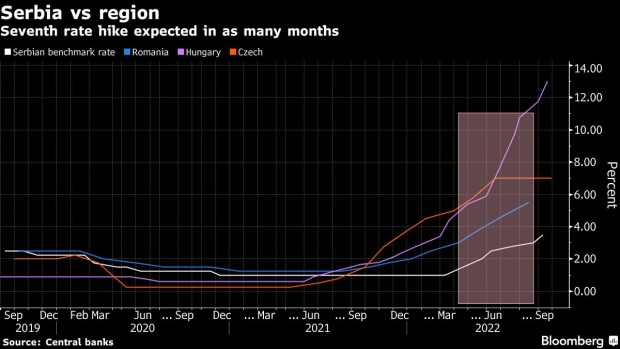 (Bloomberg) -- Serbia is expected to raise its benchmark interest rate to the highest in five years to tame rising inflation as persistent price pressures outweigh concerns over economic growth.

The central bank in Belgrade will likely lift its one-week repurchase rate by half a percentage point to 4% on Thursday, according to nine of 19 economists in a Bloomberg survey. Eight expect a quarter-point increase and two see the benchmark staying at 3.5% this month. The median forecast is 3.75%, the seventh rate increase in a row.

“Further tightening is justified by high inflation and monetary-policy tightening by the European Central Bank and the Fed, which could endanger capital flows to emerging markets,” UniCredit SpA analyst Mauro Giorgio Marrano wrote in a research note.

He sees the policy rate rising to 4% this month and peaking at 5%, still below regional peers.

A latecomer to the hike frenzy in the region, Serbia began increasing its benchmark only in April, after applying other tightening tools to mop up excess liquidity when food and energy prices began accelerating. Policy makers are mindful of the Balkan nation’s economic expansion which has been slowing for four quarters, though still on track for the planned 3.5% to 4.5% growth this year.

Serbia’s annual inflation was at 13.2% in August, and is seen gaining pace to 13.6% in September, according to the survey, which also indicates that it will stabilize at that level in October.

Central bank Governor Jorgovanka Tabakovic has said that headline inflation could peak this month, at 14%.

The National Bank of Serbia’s rate setters have long focused on core inflation, but even that gauge, at 7.9% in August, well exceeds the nation’s tolerance band of 1.5% to 4.5%. The central bank sees the consumer-price index returning to the target range in the first half of 2024.

Serbia’s dinar has remained stable, kept in a narrow range against the euro with interventions by the central bank, which has been buying the common currency since May to fend off appreciation pressures.

“With uncertain global financial and economic situation, the NBS will continue to pursue stable dinar but some modest seasonal depreciation could come soon,” said Jakub Kratky, an analyst at Generali Investments in Prague.