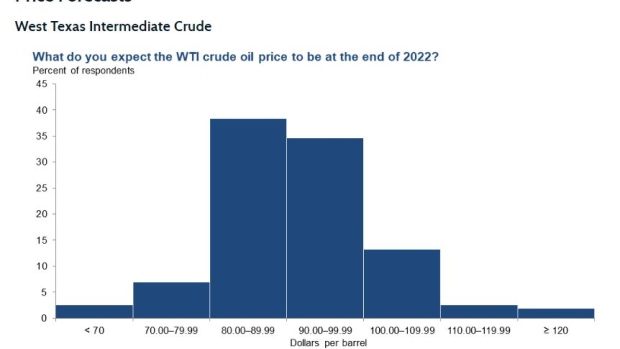 Pumpjacks extract crude oil from active oil wells at the Synergy Oil Field on the Los Cerritos Wetlands in Seal Beach, California, U.S., on Saturday, April 23, 2022. U.S. natural gas prices have almost doubled this year to the highest since the shale revolution more than a decade ago, driving up energy costs and helping fuel the fastest inflation in 40 years. , Bloomberg

(Bloomberg) -- Shale executives have dramatically dialed back their oil-price expectations over the past three months as recession risks weigh on the market, according to the latest energy survey by the Federal Reserve Bank of Dallas.

US oil prices, which averaged $85.49 in the July-to-September period, are expected to end the year below $100 a barrel, according to the Dallas Fed’s quarterly energy survey. The greatest number of respondents in the quarterly survey are planning for West Texas Intermediate to fall in the $80 range, a sharp contrast from the previous quarter quarter when the most popular opinion called for crude to finish above $100 for the year.

“The probability of a worldwide economic recession is casting a long shadow on the demand for oil that is offset by the Russia‒Ukraine conflict,” one unidentified respondent was quoted as saying in the survey released on Wednesday. “The unknown outcome of the upcoming midterm elections in the U.S. creates a lot of anxiety in the oil community. Our investment in new projects will await greater clarity of the road ahead.”