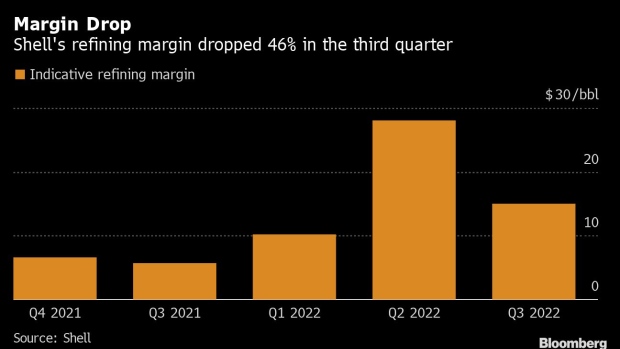 A freight train near a storage tank in the Shell Plc refinery at the Port of Rotterdam in Rotterdam, Netherlands, on Tuesday, March 8, 2022. Europe's biggest port is where the sharp end of sanctions against Russia looks likely to hurt the Netherlands, even if the nation's economic statistics might suggest otherwise. , Bloomberg

In particular the company’s chemical unit -- often seen as an indicator of the strength of the wider economy -- had a negative margin of $27 per metric ton in the period, Shell said in a statement on Thursday. That could be a worrying sign for Europe’s economy, where major industries are buckling under the pressure of soaring natural gas prices.

“It’s a clear indicator of what may yet be coming,” said Christof Ruhl, a researcher at Center on Global Energy Policy at Columbia University. “If we go into a winter with higher gas prices and no government support, we’ll see more midsize and potentially large companies shutting down.”

“Overall, we see the statement as disappointing,” Biraj Borkhataria, an analyst at RBC Capital Markets, wrote in a note. “We would expect to see consensus downgrades on the back of this.”

Shell shares fell as much as 4% in London.

Gas trading performance was “significantly lower” than the second quarter and Shell’s indicative oil-refining margin dropped to $15 a barrel, compared with $28 in the prior period, according to the statement. That’s still more than double the level a year ago.

The combined hit to adjusted third-quarter earnings before interest, taxes depreciation and amortization from the weaker performance in refining and chemicals could be as large as $2 billion, Shell said.

One of Spain’s largest oil refiners, Cia Espanola de Petroleos SA, said on Wednesday that it has temporarily cut production of a key chemical used in the automobile and construction industries as elevated energy prices undermine the economy.

Falling demand for phenol is “a bit of a canary in the coal mine when it comes to recessions,” Maarten Wetselaar, Cepsa’s chief executive officer and a former Shell executive, said in an interview.

“One way or another there needs to be government intervention,” van Beurden said at the Energy Intelligence Forum, a major conference for oil and gas producers in London on Tuesday. “Protecting the poorest, that probably may then mean that governments need to tax people in this room to pay for it.”

Shell expects to pay tax of between $3.4 billion and $3.8 billion for the third quarter, according to the statement.

Europe Union ministers reached an agreement last week on an initial energy package, setting a goal to reduce power consumption and agreeing to tap windfall profits of companies and redirect them to customers and businesses.