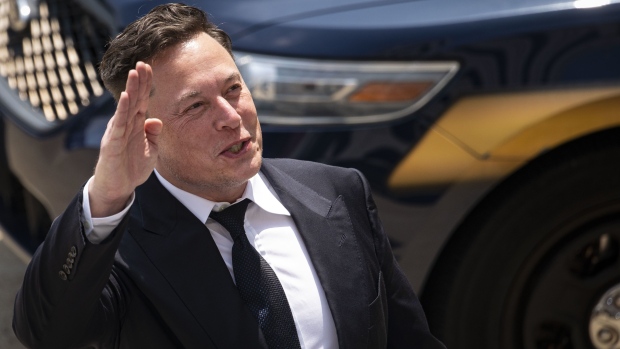 Elon Musk, chief executive officer of Tesla Inc., waves while departing court during the SolarCity trial in Wilmington, Delaware, U.S., on Tuesday, July 13, 2021. Musk was cool but combative as he testified in a Delaware courtroom that Tesla's more than $2 billion acquisition of SolarCity in 2016 wasn't a bailout of the struggling solar provider. Photographer: Al Drago/Bloomberg , Bloomberg

(Bloomberg) -- Elon Musk helped Shiba Inu vault up the ranks of the largest cryptocurrencies by market value by tweeting a photo of his puppy. Now the meme token is down after he said he doesn’t own any.

Musk, who has repeatedly touted Dogecoin on social media and frequently commented on cryptocurrencies more broadly, responded to a query from a Twitter user asking how much Shiba Inu he holds with, “None.” In a follow-up tweet, he said he has bought Bitcoin, Ether and Dogecoin, and “that’s it.”

As of 9:30 a.m. on Monday, SHIB, as the crypto is known, was down 15% from its all-time high reached on Sunday Hong Kong time, according to pricing from CoinGecko.com. The token -- centered around a breed of Japanese hunting dogs -- has risen more than 400% in the past 30 days to be the 11th-largest by value.

Dogecoin has climbed about 10% in the past 24 hours, according to CoinGecko.

Shiba Inu has rallied amid factors including a push to get it listed on Robinhood, its ecosystem’s foray into non-fungible tokens and general enthusiasm for meme assets. However, many market observers say there’s often little reason for its movements and caution that the token may struggle to maintain its current momentum. It was founded in 2020 by an anonymous person going by the name Ryoshi.