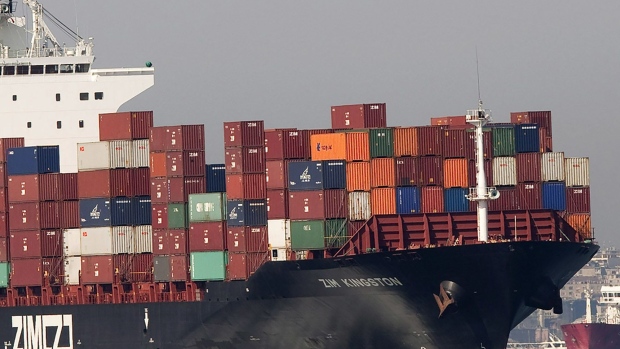 The container transport ship Zim Kingston passes through the Bosporus shipping channel in Istanbul, Turkey, on Monday, May 23, 2011. Prime Minister Recep Tayyip Erdogan said Turkey will build a canal from the Black Sea to the Marmara Sea, turning the city of Istanbul into "two peninsulas and an island" and diverting shipping traffic from the Bosporus. Photographer: Bloomberg/Bloomberg , Photographer: Bloomberg/Bloomberg

(Bloomberg) -- A container vessel has been evacuated after a fire broke out aboard the ship off British Columbia.

Sixteen people have been rescued from the Zim Kingston, the Canadian Coast Guard said on Twitter. The fire, affecting 10 containers, remained “a dynamic event,” and responders were on the scene near the provincial capital, Victoria, according to the post late Saturday local time.

The Zim Kingston lost more than 40 containers in rough seas on Friday, with the U.S. Coast Guard saying in a Twitter post that it was monitoring several of them after they went adrift in the choppy conditions.

Zim Integrated Shipping Services Ltd said in a statement that it’s “closely coordinating with the vessel’s owners, the Canadian authorities and other relevant agencies, while working under heavy weather conditions, to handle the incident.” The company added its main concern was crew safety and preventing environmental impact.