Walmart Inc. has partnered with e-commerce giant Shopify Inc. to expand its third-party marketplace site and grab more of the pandemic-fueled surge in online shopping. Shares of the Canadian technology company rose in early trading.

The world’s largest retailer aims to add 1,200 Shopify sellers this year, Walmart executive Jeff Clementz said in an interview. The company’s marketplace site, which already offers more than 75 million products, grew at a faster pace than Walmart’s overall web business in the first quarter, and third-party sales are typically more profitable as the sellers pay a fee to list items and often shoulder the delivery costs.

The collaboration is Walmart’s latest attempt to expand the scale and profitability of its $21.5 billion U.S. e-commerce business, which is gaining ground on market leader Amazon.com Inc. but continues to lose money. In recent years, Walmart has rolled out a fulfillment service for third-party sellers, allowed customers to return marketplace items in its physical stores and jettisoned millions of third-party items that didn’t meet quality standards.

“There are many Shopify sellers who were already on Walmart.com, but we have not penetrated their base to the extent possible,” said Clementz, who is vice president of Walmart Marketplace. “There’s a tremendous opportunity.”

For Shopify, the deal -- expected to be announced as early as Monday -- provides its network of millions of merchants access to Walmart’s customers, and follows a May linkup with Facebook Inc. that allowed retailers to import Shopify product catalogs to the social-media giant’s new Shops service.

“Few companies in the world match the sheer size and scale of Walmart,” said Satish Kanwar, Shopify’s vice president of product. The deal opens the door for small and medium-sized businesses “to access the 120 million customers who visit Walmart.com every month.”

The deal is “a win-win for both companies,” said Juozas Kaziukėnas, founder of Marketplace Pulse, an e-commerce researcher. Still, the partnership diverges from Shopify’s typical strategy of acting as a platform for brands competing with large retailers, he said.

Shopify’s U.S. shares rose as much as five per cent before regular trading Monday in New York, even as the Canadian and U.S. markets were poised to decline. Walmart was little changed.

Founded in 2006, Shopify has become the platform of choice for businesses large and small that are looking to get online cheaply and quickly. Monthly fees start at just US$29, which buys a virtual shop and everything that’s needed to run it, including tools to manage payments, inventory and shipping.

The Ottawa-based company claimed the second-largest share of online retail sales in the U.S. last year, and its meteoric growth has made a billionaire out of German-born founder and Chief Executive Officer Tobi Lutke. 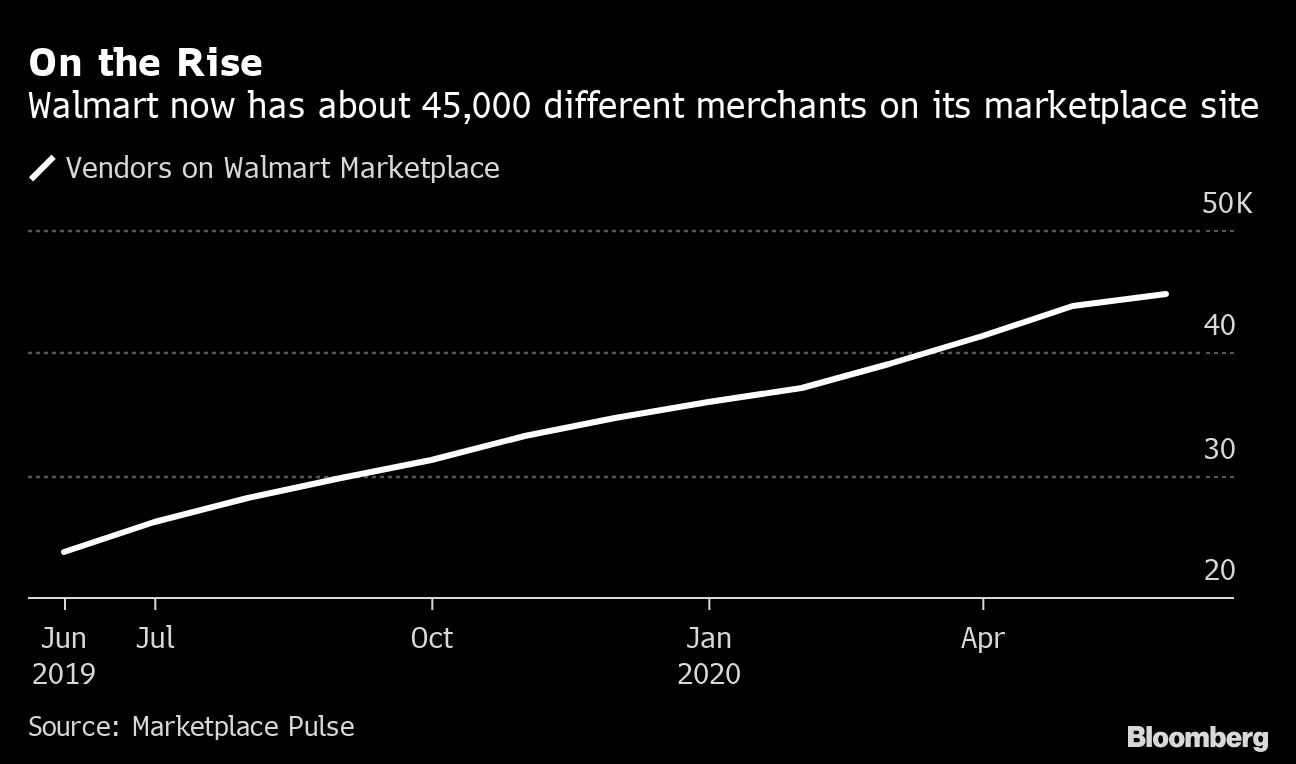 Walmart introduced its marketplace site in August 2009, but progress was glacial at first as the retailer was focused more on its massive brick-and-mortar business and slow to recognize Amazon’s growing clout. That started to change when Doug McMillon became CEO in 2014, and accelerated when he put Marc Lore in charge of the retailer’s U.S. e-commerce division after acquiring his online startup, Jet.com, in 2016.

Lore quickly added millions of new third-party items from small vendors who were happy to have an alternative to Amazon’s dominant site. Later, he took a page out of Amazon’s playbook by offering shipping services for third-party vendors through Walmart’s massive logistics network.

“We need to start playing offense,” Lore said at a February investor conference.

McMillon wants to get even more out of the business, especially after shuttering Jet last month. “We don’t think that we’ve done everything we must do, and should do, to support marketplace sellers in terms of the tools and services that we have available,” he said at the conference, just weeks before virus-related stockpiling sent traffic to Walmart’s website soaring. First-quarter U.S online sales rose 74 per cent, more than twice the growth rate that Walmart had previously forecast for the entire year. Walmart has since withdrawn its financial guidance due to the pandemic.

To bring more direction to the marketplace business, Walmart named Jeff Shotts to run it last summer as part of a broader restructuring that sought to better integrate the online business with its physical stores, which often act as e-commerce distribution hubs.

Clementz said the two companies had been in talks on and off for years, but discussions heated up over the past six months. A recent pilot test with several Shopify sellers went well, and he foresees eventually having thousands of sellers on Walmart’s marketplace.

There are risks to opening the doors to more and more sellers. Walmart’s marketplace, along with Amazon’s, has faced criticism over the years for carrying offensive items like Confederate flags. In recent years, Walmart has pulled about 20 million items off the site that didn’t meet its quality standards. Though Amazon’s marketplace is open to virtually anyone who goes through an online registration process, Walmart’s is invite-only so it can vet sellers. It also uses machine learning and keyword recognition technology to spot suspect sellers.