We are rebalancing from being a pandemic success story to supporting offline retail: Shopify president

Shopify Inc.’s president appealed to investors to focus on the company’s growing customer base as the stock dropped again Friday to a fresh two-year low.

The Canadian firm’s shares have plunged 21 per cent since it disclosed first-quarter profit on Thursday morning that fell far short of analysts’ estimates. Shopify is navigating a “rebalancing” in retail that has seen shoppers head back to physical stores now that the COVID-19 crisis is easing, President Harley Finkelstein said.

But Finkelstein said investors should pay more attention to its expanding roster of merchants and its longer-term growth opportunities. He stressed the unfavorable comparison with last year’s stimulus-fueled lockdown spending, adding that Shopify still expects “rapid” revenue growth at the end of the year.

“We’re in an inflationary environment and consumer spending has changed dramatically,” Finkelstein said on BNN Bloomberg Television. “We’re looking at very difficult comps here. I think anyone that’s studied the stock and the market sees that. When you compare Q1 of 2022 to Q1 of 2021, we had lockdowns, we had government stimulus and it was a very different economy.”

The company doesn’t give a specific fiscal-year revenue outlook but analysts expect sales to grow 28 per cent in 2022 to nearly US$6 billion, according to data compiled by Bloomberg.

E-commerce stocks including Amazon.com Inc., Wayfair Inc., Etsy Inc. and EBay Inc. have been battered on disappointing earnings and high volatility for tech stocks. More than a dozen analysts have slashed their price targets on Shopify since the first-quarter earnings release, and Barclays analyst Trevor Young wrote that investors are growing frustrated with the firm’s limited financial guidance and disclosure. 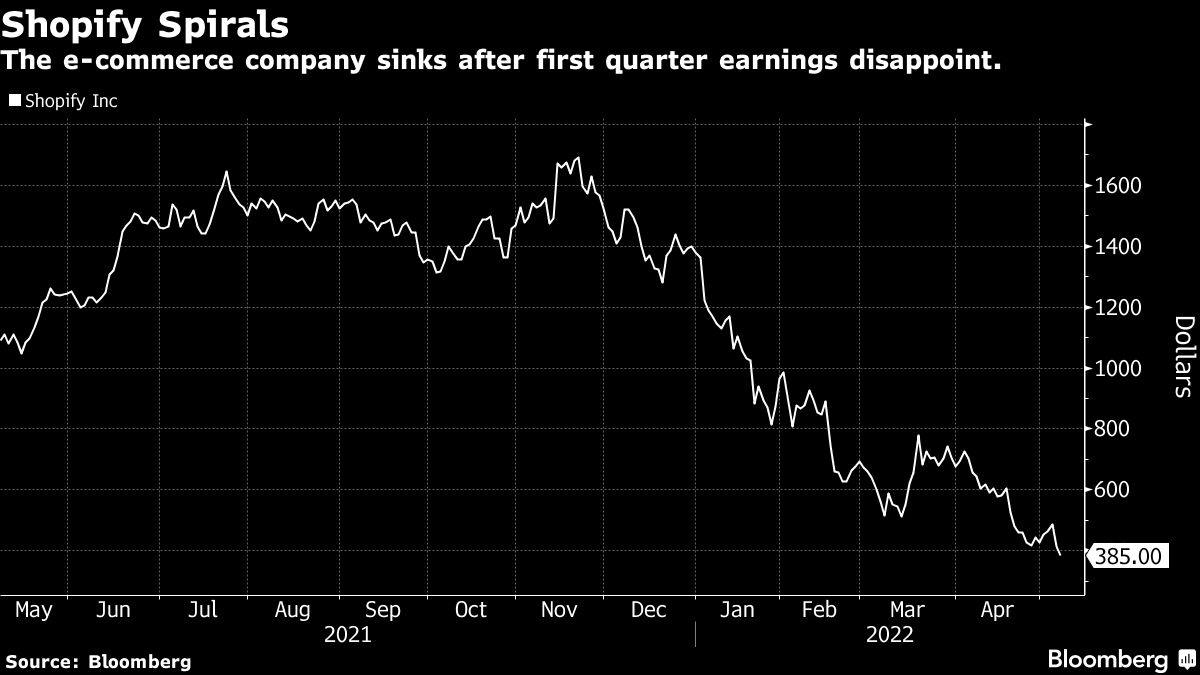 Merchant solutions revenue -- which includes services such as payments, lending and shipping -- as a percentage of gross merchandise volume was the highest it has ever been at about 2 per cent, he said.

That means that more merchants are joining Shopify’s platform and using more of its products, Finkelstein said. With its US$2.1 billion acquisition of delivery technology company Deliverr to build out its fulfillment network, it is adding another service that will boost the company’s revenue, he said.

“It’ll be a reason why people not only come to Shopify, but stay at Shopify,” he said.