Be cautious investing in Shopify in the near-term as supply chain challenges persist: Mark Mahaney

Shopify Inc. faces a wall of worry heading into its earnings release next week.

Once a pandemic-era darling, shares in the e-commerce company have plunged nearly 70 per cent this year, the worst performance on Canada’s benchmark index, as a broader tech rout, investor skepticism over slowing traffic and the company’s move to build its own distribution network weighed on sentiment.

On top of that, at least six securities-firm analysts have slashed their price targets on the tech giant in the last two weeks, casting a shadow over the beaten down stock ahead of its first quarter earnings on May 5. A wave of results by e-commerce rivals including Amazon.com Inc., which is slated to report after the market closes Thursday, could also be pivotal to Shopify’s fortunes. 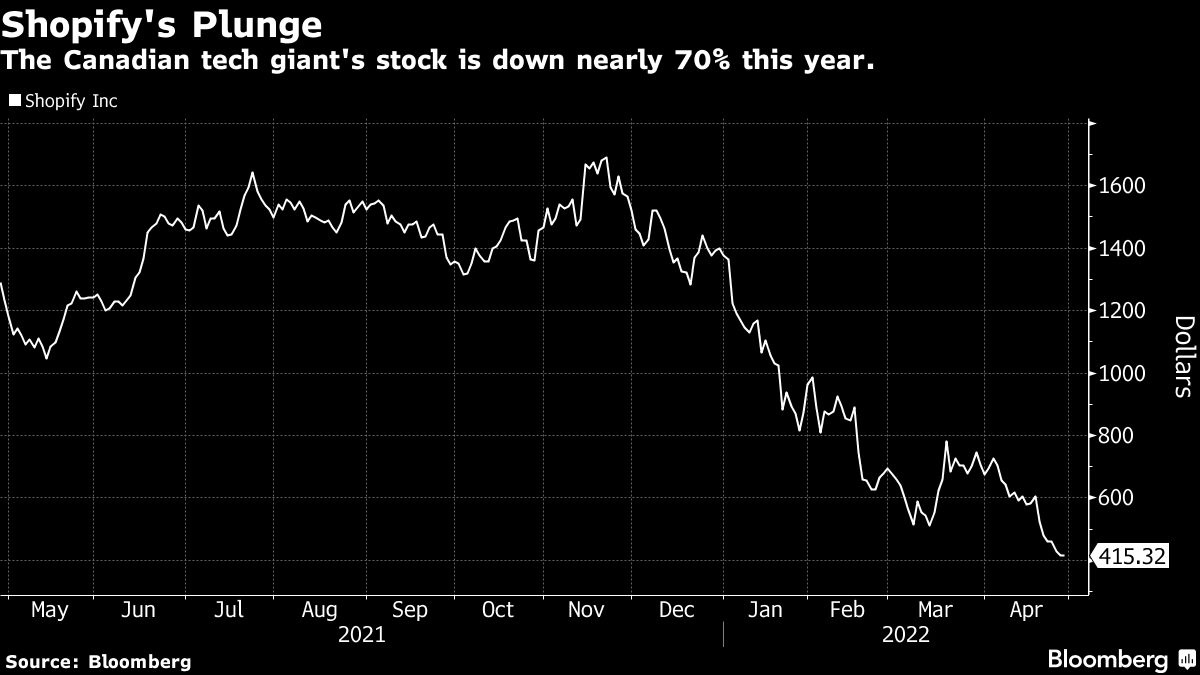 CIBC Capital Markets struck the latest blow on Thursday, slashing its target by 46 per cent to a street low of US$460 from US$850 for Shopify shares trading in the U.S. The company faces slower traffic to its website as consumers move away from e-commerce, according to analyst Todd Coupland, who rates the stock neutral.

“While Shopify has often exceeded expectations since its 2015 IPO, the margin has been shrinking,” Coupland said in a note to clients. His new price target for Shopify implies about a 10 per cent upside to the current market price, but he still recommends investors wait for a more attractive entry point.

As e-commerce traffic slows, Shopify is building its own fulfillment network to compete with companies like Amazon -- a move that could drag on earnings results, according to Citigroup.

“We still see more challenges ahead as Shopify faces extremely tough compares with a weakening consumer/macro environment,” Citi analyst Tyler Radke wrote this week, cutting the price target by about 40 per cent and opening a “90-day negative catalyst watch” on the shares.

In an attempt to draw in retail investors, Shopify announced a plan on April 11 to split its stock. The shares closed higher on the day but have since tumbled to fresh multi-year lows.

Still, even amid the stock’s torrid decline, more than half of the analysts that cover Shopify are positive on the stock, with 29 analysts rating it as a buy, 17 with holds and just two sell-equivalent rankings, according to data compiled by Bloomberg.