We really only succeed when our merchants succeed: Shopify president

Shopify Inc.’s growth continued unabated in the first quarter as it crushed both revenue and earnings expectations, countering fears that the pandemic-fueled e-commerce boom would come to an abrupt end as economies open up.

Shares of Canada’s largest company were up about 10 per cent just before noon on Wednesday in New York. After climbing almost 40-fold in the last five years, they had been flat for the year on expectations that growth would inevitably slow. 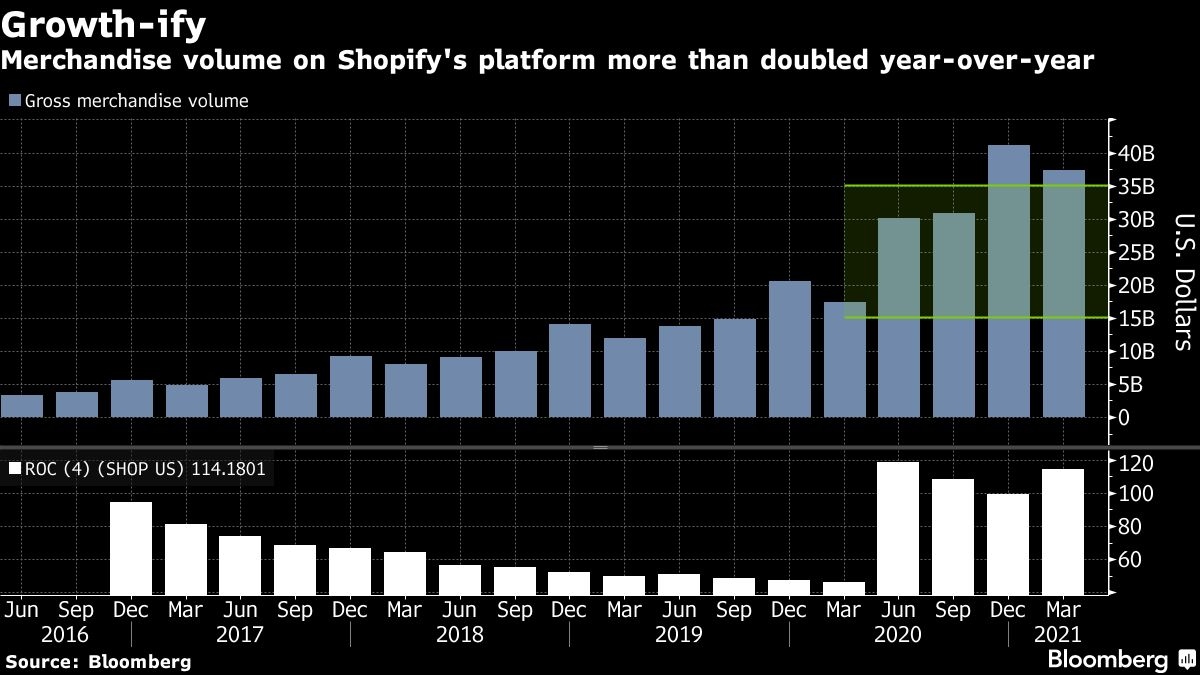 For months, investors have been speculating about when a global recovery from the pandemic would slam the brakes on online spending. But the latest estimate-defying results were fueled by accelerating revenue in every geography and at every type of merchant on Shopify’s platform, Chief Financial Officer Amy Shapiro told analysts on a conference call. U.S. stimulus checks, issued in March, added to the tailwind but the trend was already in place.

“The U.S. stimulus did have a noticeable impact to our GMV in the quarter but GMV was strong even without it,” Shapiro said, referring to gross merchandise volume, the broadest measure of sales activity flowing through merchants on its platform.

GMV more than doubled from a year earlier, to more than US$37 billion. It began accelerating in January and February, well before stimulus was mailed out to consumers, Shapiro said. Notably, that acceleration was faster outside of the U.S.

The company does still expect growth to moderate compared with last year’s lockdown-fueled bonanza. After initially tempering expectations for the first half of 2021, the company now says any deceleration in revenue growth may be pushed further back in the year as some consumers return to their pre-pandemic shopping habits, or spend more on travel and other services.

However, there are early indications that any pandemic-related pull-back in e-commerce spending will be countered by a longer-term shift to online shopping, Shopify’s president, Harley Finkelstein, said.

“In those places where things have really opened up post-pandemic, we’re actually not seeing any slowdown whatsoever in terms of consumers buying from our merchants,” he said on the call.

Net income was helped by a US$1.3 billion unrealized gain on its equity investment in Affirm Holdings Inc., which went public in January.

The Ottawa-based company (which says it’s actually headquarted on the “Internet, Everywhere”), says it’s investing heavily in expansion. Most of that spending will be in the second-half of the year, resulting in lower adjusted operating income for 2021 compared with 2020, Shapiro said.

Asked about his commitment to stay with the company after three longtime executives said they’d depart, founder and Chief Executive Officer Tobi Lutke said: “I’m in for the long term here. I’ll never in my life come up with a better idea than the one of Shopify.”