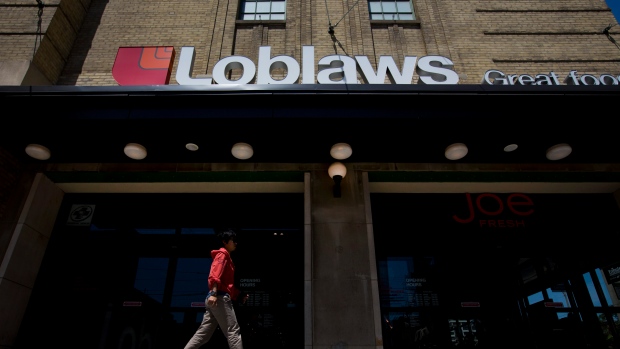 A pedestrian passes in front of a Loblaw store in Toronto, Ontario, July 15, 2013. Bloomberg/Brent Lewin

The company, based in Brampton, Ont., reported Wednesday a second-quarter profit of $286 million, essentially flat when compared with the same quarter a year ago. However, same-store sales, a key retail metric, grew just 0.6 per cent at the company's grocery store banners, which include Loblaws, No Frills, T&T and Real Canadian Superstore.

Same-store sales growth slowed from the same time last year when the metric moved up 0.8 per cent.

In the most recent quarter, retail traffic in the segment decreased, though consumers' basket size grew.

"We are not content with that performance," Loblaw Companies president Sarah Davis said during a conference call with analysts Wednesday.

The low grocery store sales growth figure came as the company created algorithms focused on profitability and increased margins -- the amount by which revenue exceeds product costs -- which decreased the emphasis on promotions to bring customers into the stores.

"You end up with fewer items on promotion in your flyer," she said of the result, which dragged sales.

Loblaw started using data-driven insights in the first quarter of 2018, beginning with its market division, and then continued into other categories as it saw positive results with improvements in margins, she explained. By the third quarter of that financial year, some elements of the technology were being brought into Loblaw's discount division as well.

"We know exactly what we did and what we did was we focused on going for margin improvements," she said on the call as analysts questioned the low same-store-sales performance.

"And in the excitement of seeing margin improvements in certain categories as we started to implement some of the algorithms, people were overzealous."

Capital Markets analyst Peter Sklar pointed out that investors will be focused on the low same-store-sales growth at Loblaw's grocery stores and negative "tonnage", or unit sales, as the company aimed to improve margins at the expense of tonnage -- unlike its biggest competitors Metro Inc. and Sobeys Inc.

"Meanwhile, Metro and Sobeys have been gaining tonnage with less focus on margin," he noted.

The company knows what it can do to change the performance, she said, and has already taken steps to address this without wavering on its commitment to the technology.

Loblaw has boosted its technological offerings in recent years, adding self-service checkouts and electronic shelf labels in stores, as well as growing its ecommerce business.

The company booked $16 million in restructuring and related charges in the second quarter, largely associated with its multi-year plan to improve efficiency across its infrastructure networks to reduce the complexity and costs of doing business.

But even as the company's grocery chains struggled, the company's drug retail division saw same-store-sales growth of four per cent in the same quarter. The best quarterly performance for Shoppers Drug Mart in three years was owed partly to "a very strong cough, cold and allergy season," said Davis.

The growing number of Shoppers Drug Mart locations that now have an enhanced food offering -- more than 100 stores -- helped drive traffic and basket gains, she said.

Overall, Loblaw Companies revenue increased three per cent to $11.1 billion for the 12 weeks ended June 15, driven largely by sales growth at Shoppers Drug Mart stores, from $10.8 billion in the second quarter of 2018.

Loblaw's quarterly profit was $286 million, or 77 cents per share, from continuing operations, down $7 million from $293 million in last year's second quarter.

However, last year's overall second quarter profit was only $50 million or 13 cents per share after including a $243-million loss from its investment in Choice Properties, which the company spun off last November.

The results were in line with analyst estimates of $1.01 per share of adjusted earnings and revenue of $11.15 billion, according to financial markets data firm Refinitiv.