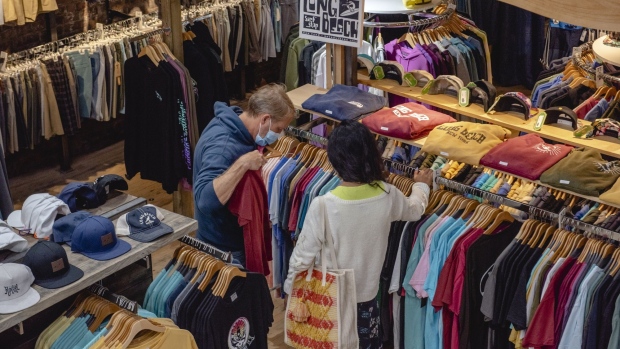 If you’re looking for a triple extra-large lime green blazer or some ultra-skinny bootcut jeans, you might want to act fast.

Thanks to a global pandemic on top of a trade war, American consumers are finding their once-endless array of apparel choices are quickly disappearing.

There’s disruption everywhere -- from manufacturing and shipping delays to store closings and plummeting consumer demand -- and merchants are desperate to avoid accumulating piles of hard-to-sell items.

This means chains are ordering less merchandise and cutting slower selling products from their aisles and websites.

So you might not be able to find those more unusual clothing styles, according to David Shiffman, co-head of consumer and retail banking at investment bank PJ Solomon.

“You’re going to do a run of blue blazers, and maybe you’ll have two different colored buttons,” Shiffman said, referring to the stocking decisions being made by retailers.

While Covid-19 has dramatically eroded demand, the current back-to-school selling season is still expected to bring in US$28 billion for retailers. Companies are carefully gauging customer response to reduced apparel inventories, and this could set the stage for the crucial year-end holiday shopping season.

Offering less inventory -- a practice that goes against years of steadily expanded assortments of sizes and styles -- is in many cases a necessity, not a choice.

Even before the pandemic, supply chains were shifting due to the tariff war between the U.S. and China. Now, the global pandemic adds another layer of complexity as new manufacturing centers such as Bangladesh and parts of Central America become virus hot spots as well. Access to cash is another consideration.

“The supply chain is a disaster,” Shiffman said. In addition to the risk that items go out of style, “there’s a limit to how much you can pack away for next year, because you’re packing away your cash.”

Inventory issues are already being highlighted by companies. Macy’s Inc. wrote down about US$300 million for the first quarter, flagging its fashion merchandise. Nordstrom Inc. said its stores were relatively bare of products soon after reopening because of a “conservative approach” to stocking levels in order to avoid being saddled with excess goods.

With shoppers still largely stuck at home, they don’t have much opportunity to show off outfits, so retailers are focusing on basics. This category usually accounts for about 70 per cent of a retailer’s mix of products.

Now, this has ticked up to 80 per cent to 90 per cent, said Ryan Mulcunry, a managing director at Great American Group, a retail advising firm owned by B. Riley Financial Inc.

Retailers have already started the culling. Gap Inc., for example, has tightened its inventory and is packing and holding some items for next season. Kohls Corp. CEO Michelle Gass, meanwhile, said the company is taking “a more prudent approach” given 2020’s limited visibility on consumer trends.

Retailers generally order merchandise 12 to 18 months ahead, according to Farla Efros, president of HRC Retail Advisory. Because of the sudden shock of the pandemic, there was only so much retailers could do to readjust ahead of the back-to-school season.

“Nobody was prepared for this, all these retailers literally had to flip a switch,” Efros said. “Most retailers are living day by day, hour by hour.”

Plus, back-to-school needs are much different than a year ago, when apparel retailers were thinking about their merchandise orders. There’s a larger emphasis on health equipment and virtual learning tools. For many, it’s unclear whether in-person classes will even take place.

“The only thing you’ll need for back-to-school is a really good internet connection and a laptop,” Efros said.