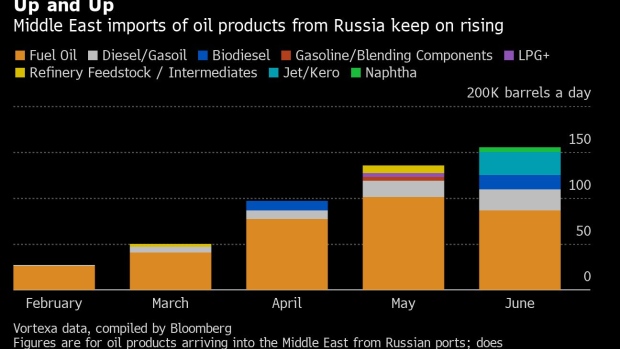 A gas pipeline marker post above the ground on the Gazprom PJSC Chayandinskoye oil, gas and condensate field, a resource base for the Power of Siberia gas pipeline, in the Lensk district of the Sakha Republic, Russia, on Tuesday, Oct. 12, 2021. European natural gas futures declined after Russia signaled that it may offer additional volumes soon. Photographer: Andrey Rudakov/Bloomberg , Bloomberg

(Bloomberg) -- Russia’s huge exports of diesel and other fuel products that are being shunned by many in Europe are fast heading to a new destination: the Middle East.

Flows to the Middle East from Russia have risen every month since February, when the war in Ukraine began. They hit 155,000 barrels a day in June, according to Vortexa Ltd. data compiled by Bloomberg. By contrast, Europe’s imports slid 30% in the period.

While shipments into the Middle East aren’t new, the flows show how the war is upending long-established trade routes and creating opportunities for traders. The US has already banned Russian petroleum fuels and many European firms are self-sanctioning. The European Union and UK are set to prohibit seaborne imports from Russia.

“When we approach the end of the year, the flow may get bigger,” said Jonathan Leitch, an oil analyst at Turner, Mason & Co., referring to diesel-type fuels. It’s likely that sovereign shipping insurance, primarily from Russia, will be made available to cover such shipments of oil products, he said.

Most of the Middle East’s imports from Russia are of fuel oil -- a leftover from the refining process and often used in power generation and shipping. They also include gasoline, jet and diesel-type fuels, as well as lesser-known products, Vortexa data show.

Middle East oil-product imports from Russia last month reached the highest since at least the start of 2016. Well over a third went to the oil-trading and storage hub of Fujairah.

Tracking what happens to Russian-origin fuel once it’s discharged at Fujairah isn’t easy, according to Koen Wessels, senior oil products analyst at Energy Aspects Ltd. After going into a tank, it can be mixed with other oil, making it hard to trace the Russian molecules, he said.

Wessels said it’s likely that Russian flows to the Middle East will continue for now. But he says they’ll probably eventually slow because of future shipping insurance-related restrictions, as Russia will then be mostly dependent on its own fleet to move cargoes.

Middle East imports from Russia are on pace to surpass June’s record, with arrivals exceeding 220,000 barrels a day for July 1-11, Vortexa data show.

Still, they amount to a fraction of Russia’s total oil-product exports. They’re also far from making up for the drop in Europe’s imports from the country, which were down more than half a million barrels a day between February and June.

Looking ahead, the unsanctioned trade in diesel-type fuel will involve Russian cargoes going to the Middle East Gulf for discharge there, and then another ship taking diesel made in the Middle East to Europe, Leitch said.

“But there will also be gray areas where probably the same product can be moved that way,” he said.