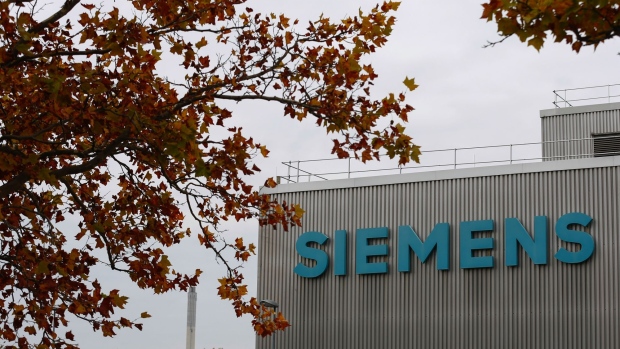 A Covid-19 patient undergoes a MRI lung scan in a Siemens AG CT scanner in the intensive care unit (ICU) at the Ambroise Pare Clinic in Paris, France, on Tuesday, Nov. 11, 2020. France is entering a critical phase in its fight to contain a resurgence of the Covid-19 pandemic with intensive care units nearing capacity. Photographer: Nathan Laine/Bloomberg , Bloomberg

(Bloomberg) -- Siemens AG forecast a modest increase in 2021 profit as the coronavirus pandemic wanes and the global economy returns to growth after a tough year for industrial companies.

Siemens predicted that net income will rise “moderately” from the 4.2 billion euros ($4.9 billion) generated in the 2020 fiscal year that ended Sept. 30, the Munich-based company said in a statement Thursday.

Siemens has so far weathered the Covid-19 crisis better than some of its automotive and industrial clients, partly because it was able to keep its factories running virtually uninterrupted. It’s also had an easier ride than U.S. rival General Electric Co., which unlike Siemens is reliant on aviation customers that have been hit by the collapse in air travel.

Siemens’s earnings round out a period of tentative recovery for industrial companies. GE reported a surprise profit and better-than-expected sales despite its aviation trouble. ABB Ltd.’s third-quarter earnings also beat estimates, as the Swiss industrial giant was helped by a strong rebound in China.

Siemens is on the frontlines of a slump that has hit the global car industry particularly hard. The maker of factory equipment and software depends on investment by companies, which often drops during a downturn.

Group sales declined 2% to 57.1 billion euros in 2020, largely because of the pandemic. Analysts had expected revenue of 57.5 billion euros.

Once Chief Executive Officer Joe Kaeser finishes his tenure next year, he will leave Siemens a transformed company that bears little resemblance to the one he took over in 2013. The engineering giant this year spun off its energy activities into Siemens Energy AG, which reported a loss this week after booking 1.5 billion euros in costs and suffering from power-plant project delays.

What’s left of Siemens will focus on factory automation and software, along with a unit that makes trains. Deputy CEO Roland Busch, who will succeed Kaeser, already oversees much of the day-to-day responsibilities for those divisions.