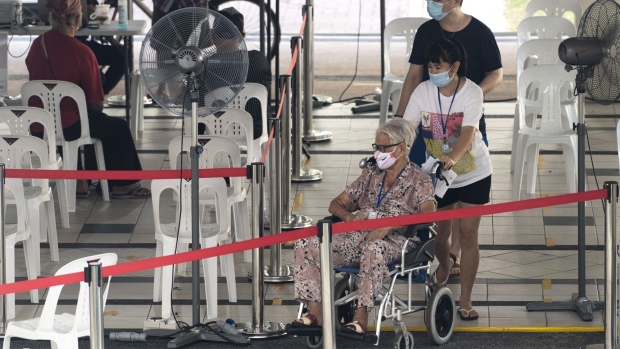 (Bloomberg) -- Senior members of Singapore’s ruling People’s Action Party are concerned that mixed signals from the country’s virus task force are giving the appearance of divisions that could lead to rare infighting, people familiar with the situation said.

The party cadres, who decide which individuals are admitted to the PAP’s top decision making body, were concerned perceptions of a split could spur members to choose sides in the informal contest to succeed Prime Minister Lee Hsien Loong, whose plans to step aside were delayed amid the pandemic after his heir-apparent bowed out earlier this year. They said the prime minister or another senior member should take charge and show decisiveness, according to the people.

Lee’s disrupted succession plan -- unusual in a country used to orderly transitions -- has added more pressure on the PAP as it looks to keep the economy on track while dealing with rising concerns about foreign workers in the financial hub. Although the party prolonged its nearly six-decade rule in an election last year, the opposition gained a record number of seats.

While the virus task force and Lee’s cabinet make key decisions and implement them as a team, Finance Minister Lawrence Wong and Health Minister Ong Ye Kung have noticeably focused on different aspects of the pandemic response in recent public comments as the country announced stop-start changes in its reopening plan. Wong has generally appeared to favor tighter measures to contain the virus, while Ong is seen as a greater advocate for opening. Both are regarded as prime contenders to one day take power from Lee.

The disquiet in the party reflects a broader debate within Singapore society about the pace of opening up, even as it boasts one of the world’s highest vaccination rates. The Southeast Asian financial hub has sought to balance the need to resume international travel and domestic activity with keeping overall mortality rate low, leading to abrupt shifts in policy on issues like working from home and dining out.

In an interview with Bloomberg TV on Monday, Wong denied any divisions, saying the task force carefully deliberates all decisions and “definitely” operates by consensus. He appeared to align more clearly with Ong, saying the country would continue to reopen even as officials looked to keep the caseload contained while augmenting hospital capacity to handle 5,000 daily new cases or more.

After targeting zero cases for most of the pandemic, Singapore has started to tolerate more. It saw 1,939 new cases on Monday, the highest tally since April.

“We do not take the trust that people have in the government for granted at all,” Wong said.

Ong, the Prime Minister’s Office and the PAP didn’t immediately respond to requests for comment on the perceived differences of opinion and whether Lee was considering changes to the virus task force.

“Having a clear leadership may work better -- either Lee or his senior ministers should take charge,” Inderjit Singh, a former PAP lawmaker, said by phone. “The focus should be to tackle the pandemic and not a means to decide on selecting the future prime minister.”

For more on Singapore’s politics, read:

One of the incidents that spurred confusion occurred earlier this month, when Wong told the press that Singapore shouldn’t rule out sweeping lockdown measures entirely amid rising infections. Those remarks appeared to contradict Ong, who was attending a Group of 20 meeting of health ministers in Rome at the time. He had earlier said he believed a so-called circuit breaker was “behind” Singapore.

Wong and Ong both rose to the fore as potential successors to Lee after his designated heir, Heng Swee Keat, shocked Singapore by stepping aside in April. At the time, Lee said the goal was to identify a successor among younger leaders before the next election due in 2025.

As the main public face of Singapore’s virus response last year, Wong won plaudits for speaking clearly to reassure the public and acting decisively to stem a surge in infections in foreign worker dorms. When he became finance minister after Heng stepped aside, Ong became a co-chair as health minister and the team presided over a vaccination campaign that has now inoculated more than four in every five people -- a feat that other developed nations have struggled to achieve.

Yet views between Wong and Ong appeared to diverge shortly after the task force drew up plans to reopen more when 80% of the population was vaccinated. In July, Ong said Singapore must find ways to live with the virus and it would not be “unusual at all” to have 200 cases or more per day.

But by Sept. 3, that resolve was tested with daily infections climbing higher than 200. Wong then made it clear the government would keep current rules and not make new opening moves. The government implemented more regular testing for some workers and expanded home recovery for Covid-19 patients to prevent hospitals from getting overwhelmed.

In the middle of the month, Ong called the jump in infections a “rite of passage” for nations that have resumed some semblance of normalcy. That stirred discontent, with more than 6,300 people signing a petition calling for Ong to resign. Others have taken to social media to voice their frustrations with home recovery arrangements and post satirical memes.

“For friends who know my phone numbers, they text me all the time and give me that feedback, but for every one of them I also get another one to say ‘why don’t we lock down,’” Ong said during a health summit in mid-September in response to a question on whether the government was being too cautious about reopening. “So, there is a range of risk appetites around Singapore.”

A survey by Milieu Insight found that 52% of Singaporeans felt the latest restrictions on social gatherings were “just right,” with 25% saying they were too strict and the rest calling them too lax, the Straits Times reported on Tuesday.

“The differences in approaches and tone have been magnified in large part because of the public awareness” that Wong and Ong are frontrunners to become prime minister, said Nydia Ngiow, Singapore-based senior director at BowerGroupAsia, a strategic policy advisory firm.

Such publicly divergent views would usually be unheard of for a party used to the strong-arm leadership of its founding father Lee Kuan Yew, according to Bilveer Singh, associate professor at the National University of Singapore’s department of political science.

“In the late 1970’s Lee Kuan Yew said, ‘give clear signals -- don’t confuse people,” Singh said. “This is the master talking. Now, somehow or another, I think the PAP failed here.”