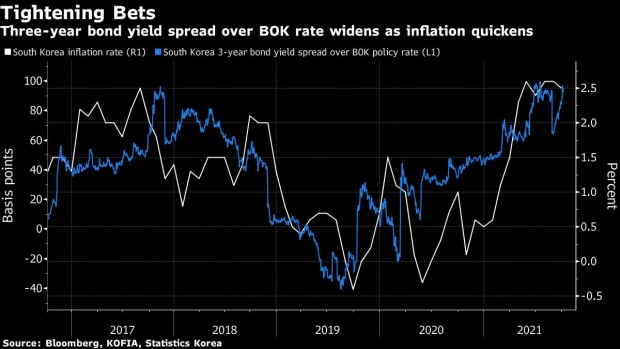 (Bloomberg) -- South Korean bond bears reaped a windfall as yields surged in September. Politics may prove to be an unlikely ally as they bet on more gains.

Monetary policy is shaping up to be a key issue in the run-up to next year’s presidential election, with candidates expected to focus on ways to rein in soaring household debt, rising debt loads and asset-price bubbles. Traders see a tightening, with swap markets pricing in more than an even chance of a rate hike next month.

The nation’s three-year yield jumped 20 basis points in September as its U.S. counterpart climbed and the Bank of Korea flagged that interest rates may rise further. The hawkish tilt mirrors the stance of developed-market central banks and could set the stage for other Asian policy makers to follow suit.

“Reining in the jump in asset prices has been the Achilles heel for both the ruling and opposition parties,” said Shin Earl, fixed-income analyst at SK Securities Co. “It’s increasingly looking as though monetary policy is being deployed to achieve their political goals.”

Three-year government bond yields could rise to 1.75% by year-end from around 1.70% now as traders price in a further increase in interest rates, said Cho Yong-gu, a fixed-income strategist at Shinyoung Securities Co.

Bets for more tightening have gained traction as a central bank board member said monetary policy remains accommodative after a quarter-percentage-point hike in August, as real interest rates are still negative. The Bank of Korea will hold two more reviews this year: on Tuesday and on Nov. 25.

Higher interest rates would complement the government’s efforts to rein in household debt, which jumped 10.3% from a year earlier in the April-June period, the fastest pace since 2017. The authorities are keen to curb asset-price gains as unaffordable housing is a key factor that has drained support for President Moon Jae-in’s administration.

The opposition has also weighed in on the issue, with a contender in the presidential race warning that debt levels are unsustainable and the housing market could be headed for a collapse.