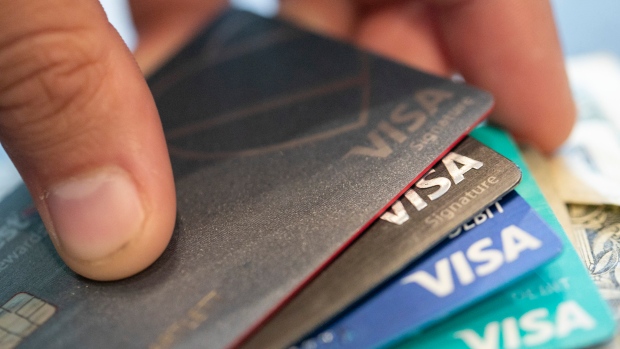 OTTAWA - Industry groups say small businesses are being hammered by high credit-card fees on online purchases as the shift toward e-commerce continues.

Visa and MasterCard reduced the fees they collect from businesses to an average annual rate of 1.4 per cent from 1.5 per cent under an agreement with Ottawa that took effect last year. But the fees remain higher than in many Western countries, particularly for online transactions, trade organizations say.

The Canadian Federation of Independent Business says the proportion of its 100,000 members that rely on online purchases has doubled to 40 per cent since March, when lockdowns to fight the COVID-19 pandemic shuttered storefronts across the country.

“Smaller companies tend to pay higher fees than large companies do, because they don't have the volumes,” said CFIB vice-president Corinne Pullman.

She said “there's no doubt” digital rates should come down, and that fees should be clearer and more transparent for merchants.

While Visa and Mastercard's overall annual rates sit at about 1.4 per cent in Canada, fees vary by transaction depending on factors that range from business type to whether a PIN code was used.

The rise in e-commerce sales “inevitably squeezes out cash” from vendors, who would otherwise draw more revenue from cash or debit transactions, said Retail Council of Canada vice-president Karl Littler.

“Mastercard did a deeper drop for those in-store transactions, but concurrently hiked the amounts for their online,” he said, referring to recent fee adjustments. “And obviously that has implications given the odd outcomes that COVID has created.”

Online retail sales rose 116 per cent to $3.91 billion in May from $1.81 billion a year earlier, according to Statistics Canada. They were up 68 per cent year over year to $3.07 billion in October, the last month for which figures are available.

Even sharper spikes are likely in more recent months amid the second wave of the pandemic in Canada, prompting heavier reliance on credit-card payments.

The CFIB and the retail council are calling on the federal government to negotiate lower fees from credit-card firms.

Finance Department spokeswoman Anna Arneson said the government “will continue to work closely with small businesses to ensure they have the support” during the pandemic, but cited no plans to bring credit-card firms back to the table.

Visa said e-commerce transaction rates are “lower than they have ever been,” with steeper rate reductions for various small businesses such as restaurants and variety stores.

Mastercard says it is committed to its voluntary agreement with Ottawa that established the 1.4 per cent average rate.

Werner Antweiler, a professor at the University of British Columbia's Sauder School of Business, said merchants “generally hate the premium cards” in particular due to “excessively expensive” processing fees.

“In a world of digital commerce, the idea to pay two to three per cent on each transaction is a kind of tax, when in fact the transaction has only minimal costs that are nowhere near these amounts and are in fact independent of the transaction volume,” Antweiler said.

The average rate reduction to 1.4 per cent from 1.5 per cent would amount to just $100 worth of savings for businesses for every $100,000 in credit-card sales, according to the retail council.

One goal of the lower rates was to enable smaller firms to avoid a big competitive disadvantage compared to larger companies, which have more leverage in negotiating for reduced fees.

The government has also said the reduction could help consumers because businesses will be able to keep prices lower.

In November 2014, Visa and MasterCard voluntarily agreed to reduce their average effective fees to 1.5 per cent over five years - a period that began in April 2015.

A Finance Department review of the credit-card code of conduct is ongoing.