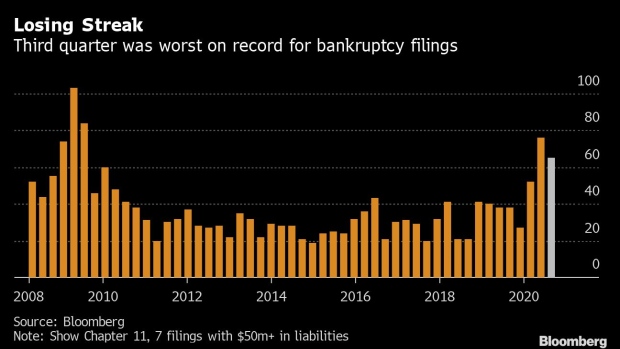 (Bloomberg) -- Though the biggest U.S. companies may be going bust at a slower pace, smaller firms are bumping bankruptcy filings back to levels seen during the ugly summer months, according to Epiq AACER.

About 620 companies in the U.S. filed for Chapter 11 protection this month through Sept. 25, a 48% increase over the same period last year, according to the legal services provider. June and July saw 609 and 644 filings this year, respectively.

“We’re seeing a continued strong flow of Chapter 11 filings in September, consistent with what we saw in June and July,” Chris Kruse, senior vice president at Epiq, said in an interview. They range from businesses with small footprints to high street retailers, Kruse said.

Large U.S. companies have been helped by abundant liquidity after intervention by the Federal Reserve. Smaller firms were shut out, leaving them more exposed to bankruptcy as government support programs expired with little progress on fresh stimulus in Congress.

“We will continue to see filings for companies that had been the most disrupted by Covid and are operating in a zero revenue environment,” Deirdre O’Connor, managing director of corporate restructuring at Epiq said in an email.

The pandemic has battered New York City businesses, with almost 6,000 closures, a jump of about 40% in bankruptcy filings across the region and shuttered storefronts in the business districts of all five boroughs.

Despite the recent slowdown in filings by companies with more than $50 million in liabilities, this is the worst ever third quarter for bankruptcies, according to data compiled by Bloomberg.

In the week ended Sept. 26, there were four filings of that scale, including auto-parts maker Garrett Motion Inc. which filed for bankruptcy with plans to sell itself to KPS Capital Partners for $2.1 billion.

There have been 193 bankruptcy filings year-to-date by companies with more than $50 million in liabilities, according to data compiled by Bloomberg. That’s the most for any comparable period since 2009, when there were 271 in the full year, the data show.

The total amount of distressed bonds and loans traded rose by 4.4% to $278 billion as of Sept. 25, the first increase in five weeks. That’s down from $935 billion in March, data compiled by Bloomberg show. Volume of distressed bonds rose by 8.2% while loans fell 3.9%.

Sectors hard-hit by the pandemic saw volume of distressed debt swell, including airlines with a 10% increase, a 55% surge in leisure and a 19% jump in transportation.

There were 564 distressed bonds from 293 issuers trading as of Monday, compared with 559 and 294, respectively, one week earlier. That’s significantly less than the 1,896 issues from 892 companies at the March 23 peak, Bloomberg data show.

American Airlines Group Inc. and Transocean Inc. topped the ranks of issuers with the most debt trading at distressed levels that hadn’t filed for bankruptcy as of Sept. 25, data compiled by Bloomberg show.

Several distressed companies have upcoming deadlines. Mallinckrodt and Pacific Drilling have debt payments due; both have warned of potential bankruptcy.