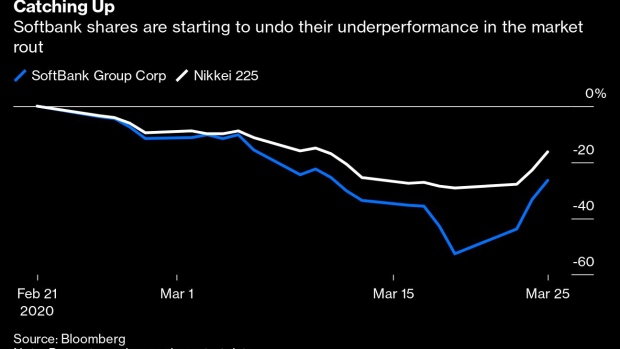 (Bloomberg Opinion) -- It’s not fun being graded at the best of times, and it’s never pleasant being “downgraded.”

Just look at this week’s spat between SoftBank Group Corp. and credit-rating provider Moody’s Corp following a double snip to the technology investor’s credit score. The row lays bare the complicated subjective and quantitative dynamics of judging a company’s credit worthiness. With business facing a mass downward revision, it’s a taste of things to come.

The primary justification for Moody’s cut was “the unexpected size and apparent urgency” of a 2 trillion yen ($18 billion) share buyback program announced by SoftBank earlier in the week. That’s a controversial view because the cost of the share purchases would be more than covered by 4.5 trillion yen of planned sales from SoftBank’s investment portfolio. The vast majority of these proceeds would actually be used to cut debt.

Markets had thought this was all good. With SoftBank’s shares trading at a big discount to the value of its underlying holdings, the maths of buying its own stock looked attractive. And what’s not to like about debt reduction?

But Moody’s was puzzled by the timing. “It is unclear why [SoftBank] is undertaking such a dramatic recapitalization during a time of severe stock and market volatility,” it said, somewhat ominously. It seems the ratings firm doubts the explanation that now is an opportune moment to buy back stock and cut debt as a precaution.

Moody's reasoning here is less analytical, and more an instinctive sense of caution.

SoftBank’s response was pretty instinctive too. It was absolutely furious, and has requested that Moody’s removes its ratings entirely. The credit assessor’s puzzlement is viewed as plain bias by the downgraded company. SoftBank has accused Moody’s of ignoring the fact that the asset disposals would happen over the course of a year, not in some dramatic firesale now, and the smaller portfolio would still mainly comprise easy-to-sell securities. (Moody’s hasn’t responded to the criticisms).

The question remains: what happens if markets and volatility hold at recent levels for a long time?

To SoftBank, Moody’s is spreading misunderstanding and deviating from its methodology. But, arguably, the back and forth — available to all to read — has been useful for investors. Yes, Moody’s analysis does appear partly based on a skeptical gut feel. Still, sometimes that’s helpful. Investors can weigh its credibility accordingly and do the same for SoftBank’s fightback.

We will see more of this kind of tension. These are difficult times. There were feuds in the post-2000 bear market and the euro zone debt crisis. Even if a downgrade is a response to circumstance, it’s usually received as a humiliation. And it may affect not only the cost of debt, but potentially access to borrowing entirely.

The ratings firms were on the back foot during the financial crisis after wrongly assessing subprime structured credit as safe. Tension flared again in 2011 when S&P Global Ratings removed the U.S.’s triple-AAA rating. A political backlash ensued. Weeks later, S&P’s chief executive officer stepped down.

The good news is that disagreements provide some comfort that the potential conflicts within the ratings business are manageable. The entity being graded — SoftBank in this case — pays for the privilege, which creates the risk that it gets soft treatment. A better model hasn’t been found yet: If investors paid, ratings might cease to be public and the new paymasters might seek to influence ratings firms instead.

As the downgrades start flowing, there will be more controversial justifications. Companies may have underappreciated the extent to which ratings are opinions. Their formulation is more like diagnosis than entering inputs into a formula to derive an output. As with many opinions, expect some visceral responses too.