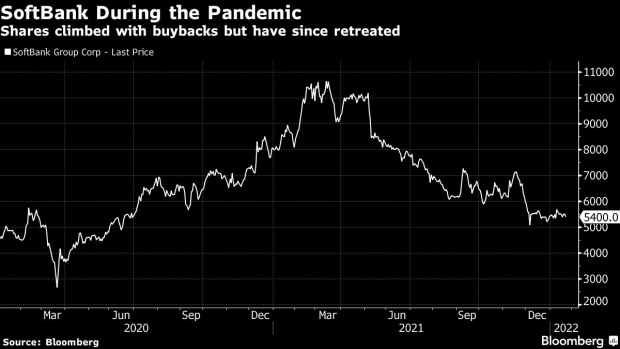 (Bloomberg) -- SoftBank Group Corp. plans to expand the Japan investment team for its Vision Fund, adding staff and stepping up deal-making after putting little of its money into its home country in the past.

That is beginning to change however. The Vision Fund team in Japan, overseen by Kentaro Matsui, is actively hiring to expand beyond its current size of four members. It’s looking to fill positions for analysts, associates and vice presidents, although there is no fixed target for the number of hires in the future, according to a spokesperson for SoftBank Investment Advisers.

The regional breakdown of SoftBank’s portfolio is 42% in the Americas, 28% in Europe, and 15% in China. However, the Chinese government has increasingly tightened regulations on technology companies and SoftBank will likely need to diversify its investments in the future.

“Japan is the world’s third largest economy and presents a compelling opportunity for high-growth tech companies,” Matsui said, in written response to questions. “We believe Japan is emerging as a center of technology innovation, particularly in sectors such as biotech and frontier tech, which are poised to drive growth in the modern economy. We are tracking its growth closely and will continue to look for opportunities to grow our team and presence in the region.”

SoftBank’s made one investment in Japan by taking a stake in the pharmaceuticals startup Aculys Pharma LLC. It also invested in SODA Inc., a startup that operates an online marketplace for sneakers and streetwear.

In an interview with Bloomberg, Aculys CEO Kazunari Tsunaba said the investment by the Vision Fund was important and valuable for the startup. He said the firm is considering an alliance with a U.S. sleep-focused company that Vision Fund has invested in, without specifying the target name.