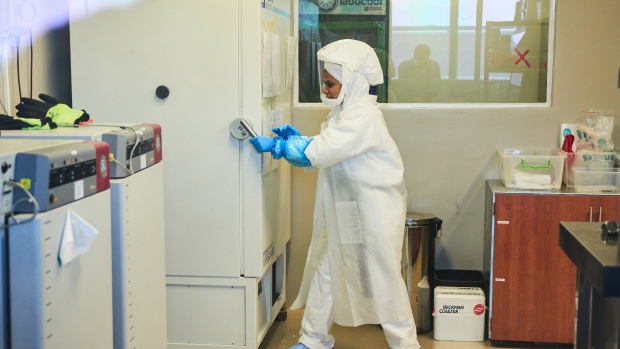 (Bloomberg) -- South Africa is enhancing its capacity to identify and respond to emerging pathogens and deadly diseases after leading global efforts to identify new strains of the coronavirus.

Having alerted the world to both the beta and omicron Covid-19 variants, the country has garnered international support to help it build new laboratories and capabilities, and hire and train more African scientists to respond to future epidemic threats. Capacity is being added across a network of a dozen institutions, which could employ as many as 1,000 additional personnel.

The expansion will help “Africa to become a world leader in genomics surveillance and bring technologies to South Africa that can identify new pathogens and human genetic mutations quickly,” said Tulio de Oliveira, who heads the Centre for Epidemic Response and Innovation in Stellenbosch, near Cape Town.

CERI is based at Stellenbosch University’s Biomedical Research Institute, which is set to become the country’s biggest medical research hub. The institute cost more than 1 billion rand ($66 million) to establish, with South Africa’s Department of Science and Innovation footing 30% of the bill -- the biggest single contributor. Equipment and three years of salaries will cost as much as 3 billion rand.

Funding has also come from international donors including the Chan Soon-Shiong Family Foundation, the European Commission and the Rockefeller Foundation’s Pandemic Prevention Institute.

CERI and Stellenbosch University have already received 41 fellows from 21 African countries and will expand its training programs this year with the help of the Africa Centres for Disease Control and Prevention and the World Health Organization.

While CERI has raised about $20 million, it will need $100 million over the next five years to “allow genomics technologies to be used in real time to trace and respond to novel epidemics and pandemics on the continent,” De Oliveira said.