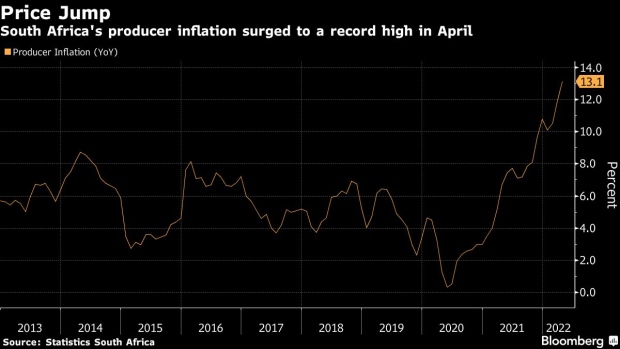 A worker wearing a protective face mask lifts an aluminium can from the production line at the Nampak Ltd. Bevcan Springs manufacturing plant in Springs, South Africa, on Thursday, Aug. 13, 2020. Manufacturing production, mining output and retail sales plunged in South Africa in the three months through June as the country imposed a strict lockdown on March 27 that shuttered almost all activity except essential services for five weeks. , Bloomberg

Prices of final manufactured goods rose by 13.1%, from 11.9% in March, according to data from Statistics South Africa. That’s the highest rate since the start of 2013, when the statistics office split its producer price index and started reporting five different measures for prices at the factory gate including agriculture, mining, electricity and water and intermediate manufactured goods. The median estimate of seven economists in a Bloomberg survey was 12%. The increase was driven by soaring costs of fuel, coal and food, beverages and tobacco.

The surge together with rolling blackouts instituted by state-owned power utility Eskom Holdings SOC Ltd. on all but three days this month will probably see Absa Group Ltd.’s purchasing managers’ index, compiled by the Bureau for Economic Research, drop in May, after falling the most in nine months in April.