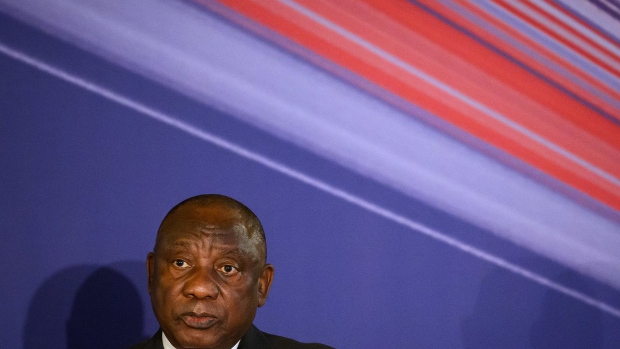 (Bloomberg) -- South African President Cyril Ramaphosa’s lawyers will challenge an advisory panel’s report that said there may be grounds for his impeachment, as the governing party’s top leaders hold a crucial meeting on how to respond to the damning findings.

The president’s legal team will file papers with the Constitutional Court on Monday, said Peter Harris, a partner at law firm Harris Nupen Molebatsi, which is acting for Ramaphosa. The documents will then be distributed by the presidency, he said by phone.

Ramaphosa considered quitting last week after the panel said he may have committed serious misconduct and constitutional violations because of the way he handled the theft of at least $580,000 stashed in a sofa at his game farm in 2020. That option was scrapped at the weekend when the presidency said Ramaphosa will ask the courts to review the “clearly flawed” findings and will seek a second term as leader of the governing African National Congress at its five-yearly elective conference next week.

The party’s National Executive Committee met on Monday to decide on whether or not to back Ramaphosa.

The president delivered a political overview to the gathering and was then excused “as he will be the subject of discussion,” ANC spokesman Pule Mabe told reporters.

Lawmakers are scheduled to hold a debate in parliament on Tuesday on whether to adopt the panel’s report, which would trigger impeachment proceedings, or reject it. ANC Treasurer-General Paul Mashatile will brief the media later on Monday on the outcome of the NEC meeting and what the party’s parliamentary caucus will be instructed to do, according to Mabe.

“Our expectation is that parliament will proceed with the debate on Tuesday and that the ANC caucus will reject the report due to its flawed nature,” Magwenya said by text message on Sunday.

On Monday, parliamentary speaker Nosiviwe Mapisa-Nqakula declined a request by the African Transformation Movement, a small opposition party, to hold a secret ballot on the panel’s report, saying it would undermine accountability and transparency.

The president has said the cash at his farm came from the sale of 20 buffalo to a Sudanese businessman, and his farm manager stored it in a couch in a spare bedroom at his private residence because he thought that would be the safest place to keep it. Ramaphosa denied doing anything wrong or interfering in the investigations -- assertions that were rejected by the panel headed by former Chief Justice Sandile Ngcobo.

If the ANC does decide that the legislature should adopt the panel’s report, a committee of lawmakers would be constituted to reassess the case against the president. Its findings would then be presented to the National Assembly, which would vote on how to proceed. Impeaching the president would require the backing of two-thirds of lawmakers.

That parliamentary process would however be derailed should Ramaphosa win his lawsuit to have the panel’s findings overturned. Pierre de Vos and Richard Calland, who are law professors at the University of Cape Town, have each written that the president has a chance of winning the case.

Ramaphosa, 70, a lawyer, former union leader and one of the richest black South Africans, took office in 2018 and was the clear frontrunner to win a second term as ANC leader and president before the panel released its explosive findings.

--With assistance from Renee Bonorchis.

(Updates with details of ANC meeting stating in fifth paragraph.)