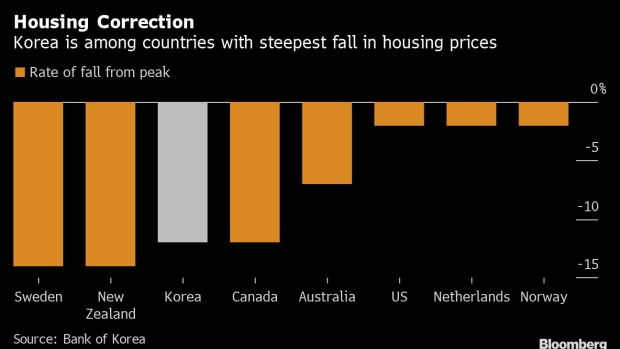 (Bloomberg) -- South Korea’s economy shrank for the first time since the beginning of the pandemic last quarter, an outcome that supports the view the central bank is likely done with interest rate hikes for now.

Gross domestic product contracted 0.4% from the previous three months as exports fell and consumer spending edged down, the Bank of Korea said Thursday. The result matched a Bloomberg survey of economists. From a year earlier, the economy still expanded by 1.4%.

Bank of Korea Governor Rhee Chang-yong had flagged the possibility of a contraction earlier this month when he delivered a quarter percentage-point interest rate increase. Recent weakness in economic activity prompted markets to interpret the hike as the final move in the current tightening cycle.

Like the Bank of Canada, any lid on interest rates is likely to be conditional on inflation continuing to cool, though Rhee hasn’t gone as far as his counterparts in Canada in stating that point.

For 2022 as a whole, the economy expanded 2.6% from a year earlier, in line with an earlier BOK projection.

The fourth-quarter setback for the economy is an indication of the difficulty of taming inflation with higher borrowing costs while also trying to secure a soft landing amid a global slowdown.

Still, the temptation to resort to an extra budget to shore up the economy should be treated with much caution, Chang said.

Officials and economists largely expect the economy to rebound without the need for a round of extra spending from President Yoon Suk-yeol’s government. Going forward, the strength of China’s economic recovery will likely be a key factor for exports, while developments in the property market number among the key areas of concern at home.

Finance Minister Choo Kyung-ho acknowledged Thursday that the economy faces a “very difficult period” in the first half of the year.

Korea serves as an early indicator of the state of the global economy as it depends heavily on international trade. The nation’s performance is closely bound up with that of major economies including China, the US and Japan.

Korea is also vulnerable to fluctuations in global commodity prices as it relies heavily on imports of oil and food. As rates climbed worldwide, companies reined in investment, reducing demand for Korean products such as semiconductors, steel and displays.

An economic slowdown in China particularly hurt Korean exports last year. Policymakers are also concerned about the potential impact of growing US curbs on China over semiconductor exports, given Korea has large chipmaking facilities in the world’s second-largest economy.

“Exports and their impact on Korea’s growth are top of mind for policymakers,” Duncan Wrigley, an economist at Pantheon Macroeconomics, said after early trade data showed an ongoing decline in overseas shipments last week.

“Korean exports will likely remain on a downward trend given the poor economic prospects in its major markets.”

While trade is in a downturn, consumption is weakening in Korea, especially after an October crowd-crush tragedy that killed more than 150 people in Seoul.

Household spending had been a key driver of economic growth for most of last year following the relaxation of virus regulations.

For this year, Korea’s economy is expected to grow slightly less than 1.7%, according to the central bank. Inflation is seen reaching around 3.6%, it estimates.

As the outlook darkens, the BOK is winding down its 18-month tightening cycle. The central bank’s hikes included two half-point moves last year as it sought to keep pace with the Federal Reserve’s aggressive tightening. The consensus among surveyed economists is for no more rate hikes this year.

Higher rates have strained Korea’s credit markets and a rare default by the local developer of Legoland Korea sent the corporate bond market tumbling last year. Deteriorating sentiment in property markets as house prices fall is another concern for policymakers.

Consumption is likely to worsen if housing prices slide further and make people feel they are becoming poorer given the share homes have in their wealth, said Ahn Dong-hyun, a professor of economics at Seoul National University. That means the government will have to focus on ensuring a gradual slowdown for the real estate market this year.

“The most important thing for the government is to avoid a hard-landing,” Ahn said. Measures that would ease debt burdens for households would also help, he said.

The economy is more likely to return to growth in the current quarter than shrink as China regains momentum following the end of its Covid lockdowns, according to Rhee.

“Whilst we see a tailwind, a quick reversal of exports is unlikely,” Bank of America economists Kathleen Oh and Ting Him Ho wrote before the release. “What Korea needs eventually is China’s final external demand pickup to strongly benefit Korea intermediary goods exports.”