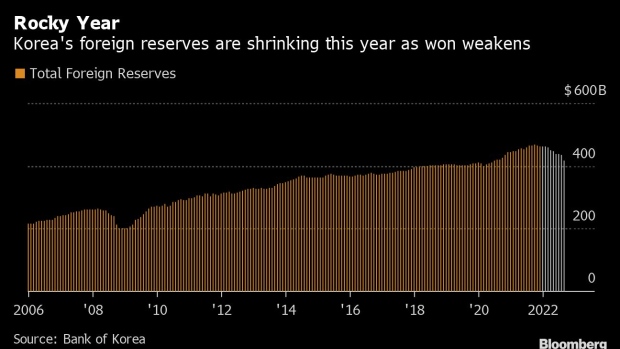 Pedestrians cross a road outside the entrance to the Bank of Korea (BOK) museum at the central bank's headquarters in Seoul, South Korea, on Thursday, Aug. 16, 2018. While the Bank of Korea has indicated that the next move in interest rates is likely to be upward and economists forecast one hike this year, the job market is making that an increasingly tough call. Photographer: Jean Chung/Bloomberg , Bloomberg

(Bloomberg) -- South Korea’s foreign reserves shrank by the most in almost 14 years in September, as the central bank drew on them to shore up a won that’s under pressure from the Federal Reserve’s policy tightening.

The reserves dropped by $19.7 billion to $416.8 billion, the Bank of Korea said in a release on Thursday, citing “steps to ease volatility in foreign exchange markets” among reasons for the decline. The fall was the largest since October 2008.

The BOK also pointed to financial institutions’ declining deposits and the decreasing value of other currencies when converted into US dollars as factors behind the fall.

The falling reserves highlight the pressure on the BOK as it mulls whether to raise its benchmark interest rate by more than usual margin next week to help stem won depreciation that is adding to inflationary pressure. The won has been the worst performing currency in Asia after the Japanese yen this year.

“The absolute level of the reserves isn’t a concern yet, but the fact they are continuing to fall is,” said Lim Hyeyoun, an economist at Hanwha Investment & Securities Co. “If the dollar keeps rising, the FX reserves will keep going down.”

The BOK will probably resort to hiking rates by a half-percentage point next week, he added. Lim expects the won to weaken to as low as 1,500 per dollar this year should the Fed stick with its hawkish stance.

Rapid policy tightening by the Fed and mounting global growth concerns have weighed on emerging Asian foreign exchange rates including the won’s, prompting authorities across the region to dip into their reserves to prop up their currencies. Still such efforts have proved insufficient, with most emerging currencies still down at multiyear lows.

Korea sold a record amount of dollars in the second quarter in an effort to support the currency, dumping a net $15.4 billion in the foreign exchange market.

The won remains the worst performing currency in Asia next to the Japanese yen this year, declining about 16%. There’s no major technical support for the won until a March 2009 low just below 1,600.