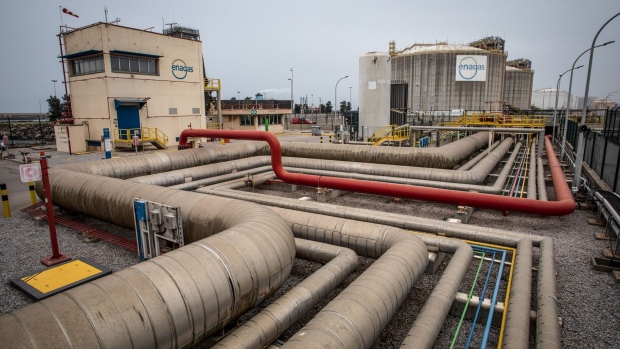 Gas pipes and storage tanks at the Enagas SA storage and distribution hub at the Port of Barcelona in Barcelona, Spain, on Tuesday, March 29, 2022. The Iberian peninsula has only small gas connections to the rest of Europe, but has about 30% of the continent’s liquefied natural gas regasification capacity and two pipelines linking it to northern Africa. , Bloomberg

(Bloomberg) -- Spain completed tests at a natural gas facility that will boost its export capacity by 18%, paving the way for France to buy more as it reduces its reliance on Russian supplies.

A compressor station in Irun, near the French border, can now be used to send an additional 1.5 billion cubic meters, according to the Environmental Transition Ministry. That means Spain can now supply 6% of France’s natural gas consumption.

European countries are trying to find alternatives to Russian fuel and stock up on gas ahead of the coldest months, when demand picks up. More Spanish exports could particularly help France -- normally an energy supplier to other parts Europe -- to tackle its own crisis fueled by nuclear outages there as well as high gas costs.

“The station is already technically ready to send that gas when our French neighbors request it,” said Environmental Transition Minister Teresa Ribera, who’s in charge of the country’s Energy policy.

The Irun station is one of two existing interconnections between Spain and France, and the expansion will now take the annual combined capacity to 8.5 billion cubic meters.

Ribera also announced the authorization of three projects that will “maximize solidarity with Italy.” Regasification facilities at the port of Barcelona will be adapted to expand loading capacity for carrying gas on small ships to other European countries.