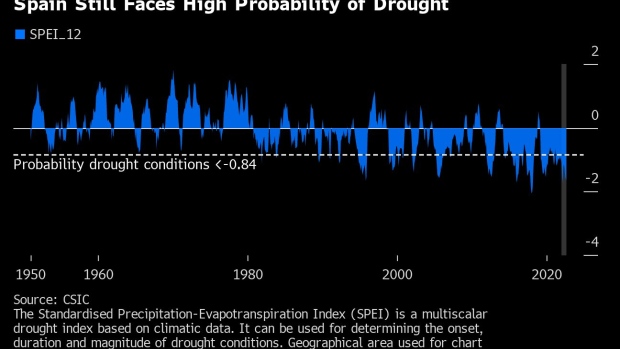 Marks from previously high water levels on towers by the Sau dam in Vilanova de Sau, Spain, on Saturday, Aug. 20, 2022. In the midst of an arid summer that set heat records across Europe, the continent’s rivers are evaporating. Photographer: Angel Garcia/Bloomberg , Bloomberg

(Bloomberg) -- Spain’s hydropower generation capacity last week dropped to the lowest in almost five years at the same time as the country braces for a drier-than-usual Autumn following the hottest summer on record.

The capacity to generate power using water was at 6,426 gigawatt-hours last week, or 27.9% of the total, according to the Ecological Transition Ministry. The drop is due to scorching heat and the lack of rain during the summer, the driest on record, with water reservoirs overall at the lowest level since 1995, according to Bloomberg calculations based on the ministry’s data.

That trend is expected to extend beyond the summer. Spanish meteorological agency Aemet said the upcoming fall is likely to be warmer and less rainy than usual in the whole country. Temperatures in September have already surged to more than 40 degrees Celsius (104 degrees Fahrenheit), setting another record.

That had a direct impact on the energy mix, increasing reliance on natural gas. Hydropower generation between June and August 2022 was 3,200 gigawatt-hours, about 2,500 gigawatt-hours less than the average for the same period in the previous five years. The decline was mainly offset by gas-fired combined-cycle plants, whose output more than doubled in the same period.