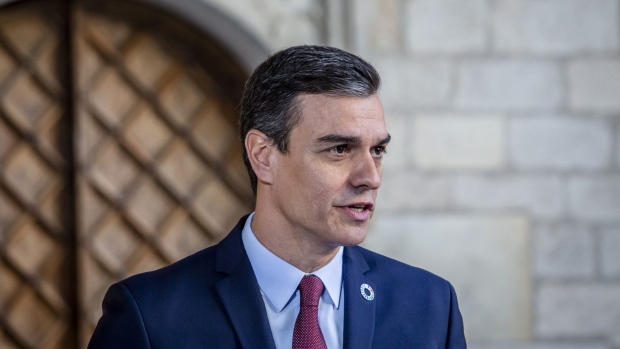 (Bloomberg) -- Spanish Prime Minister Pedro Sanchez sought to pull back from his standoff with the country’s major utilities, promising to exempt them from a new windfall tax if they sell power at “reasonable” prices.

“We will tell utilities that if they offer contracts that don’t incorporate the extra income stemming from soaring gas prices, we will not apply” the new rules, Sanchez said in a live interview with the La Sexta television channel. “We will ensure the supply of power at reasonable prices for” energy-intensive industrial users, he said.

His comments contrast with those he made when he announced the new rules during another evening television interview in September. At the time he said it was unacceptable for utilities to profit from surging power prices.

Earlier Thursday, Congress ratified the government decree to tax the extraordinary income of power firms in an attempt to limit soaring energy bills. During her presentation to lawmakers, Ecological Transition Minister Teresa Ribera, who oversees energy policy, said the rules will be modified in the next few weeks.

Shares of power firms in Spain’s benchmark IBEX 35 index rose Thursday with Iberdrola SA closing 1.2% up and Endesa SA 2.6% after Ribera’s pledge to change the decree. Since the measure was announced Sept. 13 both companies lost more than 5 billion euros in market value.