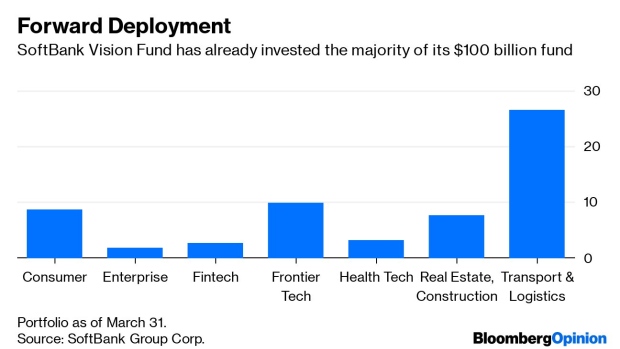 (Bloomberg Opinion) -- It’s finally here. SoftBank Group Corp.’s Vision Fund 2 has an eclectic mix of investors who have collectively pledged $70 billion on top of the $38 billion the company plans to put in.

That’s a lot of kerosene. At $108 billion, this second act is even bigger than the first. Yet Masayoshi Son will need to look farther and wider for fires to pour it on: There aren’t too many Ubers, Bytedances, Didis or Grabs left.

Son and his team will need to scour the globe and invest earlier to deploy that money. Rather than jumping on big names that have already reached the much-vaunted unicorn status, the Vision Fund 2 will probably be forced to dabble in mid-stage investing – in venture-capital parlance, that’s around Series B and C.

These will be companies that already have a business model and some traction, but may be geographically limited or lack the kind of scale needed to prove long-term viability. The risks are bigger, but so too are the potential returns from investing so early in a company’s life cycle.

Members of the second fund’s new cohort of investors will need to prepare for a slower and bumpier ride than the first, which spent the majority of its money within two years. Expect lots of failures, too. The main reason why a startup dies is because it can’t secure the next round of funding and runs out of cash after the next stage of VCs just couldn't be convinced it was viable. And a self-fulfilling cycle ensues.

That’s where Vision Fund 2 will come in. If the new fund indeed invests in earlier rounds, I expect it to subsequently invest later with the same company. This, in turn, means the fund will probably keep some startups alive far longer than they should be. I don’t think this is healthy (because some business just weren’t mean to be). But then again, Masayoshi Son has already torn up the rule book on VC investing.

We should also expect more of that largess to go to India than China, as well as Southeast Asia – and further afield to Latin America and Eastern Europe. SoftBank’s name could even appear in the press release for a newly minted African unicorn.

This is a great thing for the global startup economy because there are plenty of promising businesses popping up in hitherto unseen corners of the world. But Son will need a broader team to find and manage them. He’ll need to start recruiting locally and in larger numbers. Hiring targets could come from existing local VCs or startup founders themselves.

Finally, just as competition created by the first Vision Fund forced existing VCs to head into earlier rounds of startup funding, this new iteration will invigorate investment in the very earliest stages – seed and angel – just when deal size and count are slowing, according to data from CB Insights.

Since the first fund launched in 2017, VCs started viewing a sale to SoftBank as the new exit strategy beyond an IPO. For angel investors, knowing that a $108 billion checkbook is floating around to fund the next stage of a startup could be just enough incentive to take a punt on a new business.

If all this plays out as I’ve outlined, then Masayoshi Son’s all new Vision Fund could be quite different from the first, and yet so very similar.