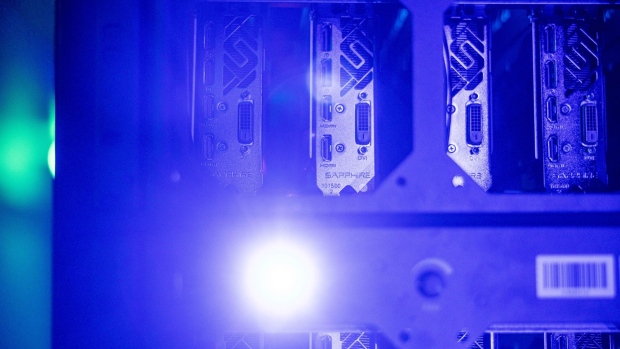 Blockchain startup Figure Technologies Inc. and other firms held talks with U.S. regulators about how to issue a stablecoin that satisfies watchdogs amid deep Washington skepticism over the fast-growing corner of the cryptocurrency market.

Senior officials of the Federal Reserve, Office of the Comptroller of the Currency and Federal Deposit Insurance Corp. met last week with Figure and its partners in an emerging crypto effort known as the USDF Consortium, according to people familiar with the meetings who requested anonymity because the discussions were private. Spokespeople for the agencies declined to comment.

The meeting with regulators comes after the President’s Working Group on Financial Markets recommended earlier this month that stablecoin issuers become insured depository institutions subject to the same supervision and regulation as banks. The USDF effort is among the first to start making the case for stablecoins that the firms hope satisfy not-yet-written rules, and others are expected to follow as the agencies try to catch up to a crypto market already surging toward $3 trillion.

“As the policy on stablecoin evolves, we believe the USDF Consortium is well-positioned to comply and continue to grow,” Ashley Harris, Figure’s general counsel, said in a statement. The group’s approach is “consistent with the recommendations of the President’s Working Group that stablecoin be minted exclusively by insured depository institutions.”

The consortium’s new coin, USDForward, differs from widely used stablecoins such as Tether and USDC because it would be issued by banks and backed by dollar deposits in a system that banking regulators already oversee.

While stablecoins such as Tether are backed by reserves meant to ensure each token can be redeemed for a U.S. dollar, critics contend those reserves are opaque and unregulated. Bank-issued digital tokens -- such as JPMorgan Chase & Co.’s JPM Coin -- are backed by dollars actually held by the lender.

In the case of USDF, New York Community Bancorp Inc. and other partner banks will take on deposits from customers who want to use the tokens. The banks will mint digital markers tied to those deposits, and the customers can deploy the markers to pay for transactions, which will be recorded on the public Provenance Blockchain.

Figure, a blockchain-lending startup, is managing the plumbing behind the consortium. The effort is also backed by JAM FINTOP, a partnership of JAM Special Opportunity Ventures -- an affiliate of financial-services investor Jacobs Asset Management -- and financial-technology firm Fintop Capital.

The three banking agencies and the markets regulators -- the SEC and Commodity Futures Trading Commission -- are still in the early days of working out what to do with crypto. A group of agency chiefs known as the Financial Stability Oversight Council is weighing whether to consider stablecoins enough of a threat to the wider financial system that they warrant intervention.