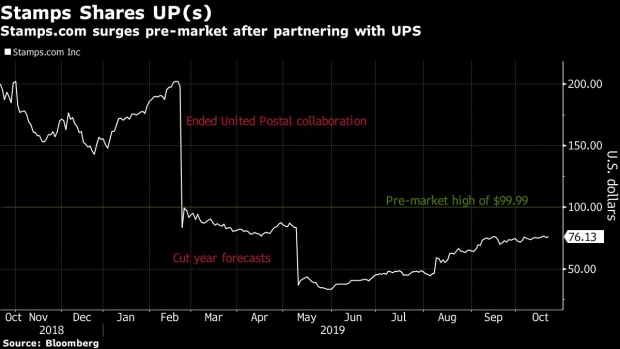 (Bloomberg) -- Stamps.com Inc. shares rallied Tuesday ahead of the opening bell after United Parcel Service Inc. announced a pact to offer discounted shipping rates to the company’s customer base of more than 740,000.

“We long mentioned a new partnership was needed to help lift shares and believe the UPS collaboration is a step in the right direction,” wrote Darren Aftahi, an analyst at Roth Capital Partners.

Rates are expected to be as much as 55% below daily rates, including surcharge waivers, he said. The deal should aid Stamps.com volume and margins and add upside to fourth quarter and fiscal 2020 forecasts, Aftahi said, even as the rates are still unlikely to be below legacy United States Postal Service rates.

The UPS collaboration marks the first partner Stamps.com has signed since ending its relationship with the USPS in February -- a move that sent the stock tumbling 58%. Less than three months later, Stamps.com cut its year forecasts, sinking the shares another 56%.

Shares of Stamps.com rose as much as 31% pre-market to $99.99, which would be the highest intraday level since late February. Before today, shares have dropped 51% this year.

The pact could be the catalyst necessary to reverse the trend in shares year to date, Aftahi said. He boosted his price target to $85 from $52. His rating remains neutral.

To contact the reporter on this story: Janet Freund in New York at jfreund11@bloomberg.net

To contact the editors responsible for this story: Catherine Larkin at clarkin4@bloomberg.net, Will Daley