Starbucks warning 'just a taste' of corporate fallout from virus

Starbucks Corp. has closed more than 2,000 locations in mainland China because of a viral outbreak that has killed more than 100 people and disrupted daily life in the coffee chain’s most important growth market.

The news cast gloom over what otherwise would have been an upbeat earnings report. Same-store sales, an important gauge of success for restaurant chains, rose five per cent in the fiscal first quarter that ended Dec. 29, outpacing the 4.6 per cent average estimate compiled by Consensus Metrix.

The company maintained its 2020 forecast but said it doesn’t include the impact of temporarily closing so many stores because it can’t yet calculate it.

“We will be transparent with all stakeholders in communicating how we are responding to these extraordinary circumstances and the implications for our near-term business results,” Chief Executive Officer Kevin Johnson said in a statement. He also reaffirmed the company’s commitment to China.

On a call with analysts, Johnson said Starbucks had planned to raise its financial projections for the year, but changed course as measures to prevent the spread of coronavirus intensified. On the ground at its China stores, the chain has adjusted menus because the virus has disrupted its supply chain, its executives said on the call. Starbucks has also altered store opening hours because consumers are avoiding commercial areas, they said. 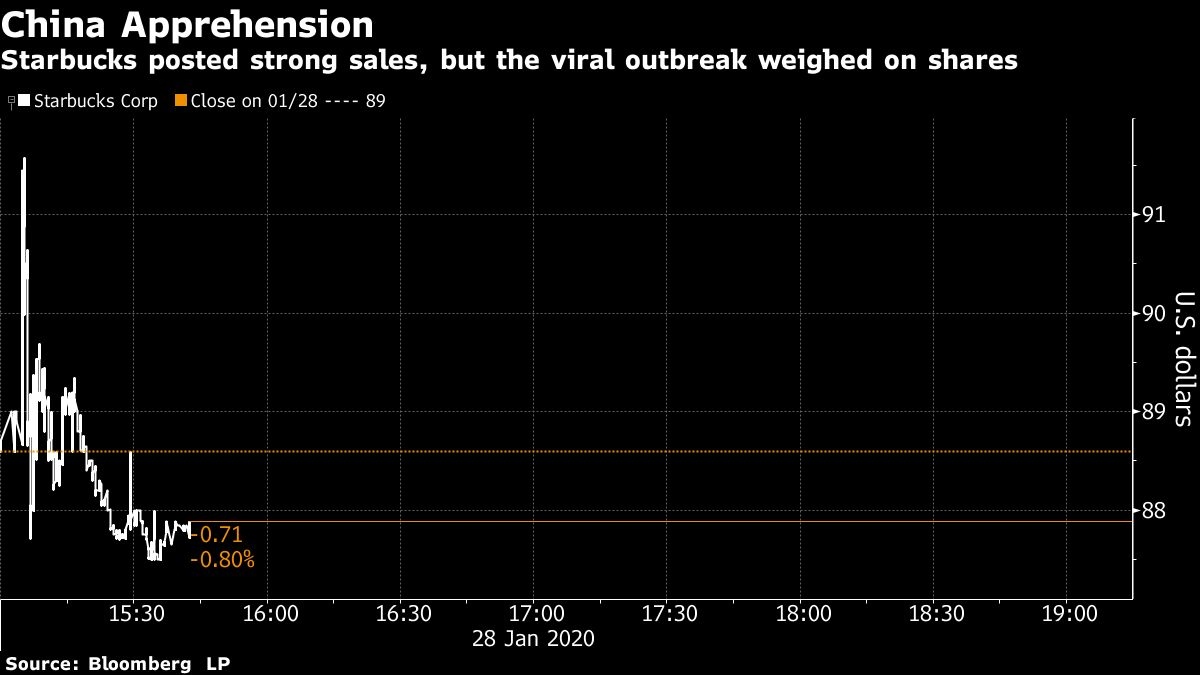 Starbucks shares reversed an initial gain in late trading, falling as much 1.4 per cent to US$87.40 as of 4:57 p.m in New York. The stock has been mostly flat in 2020 after jumping almost 37 per cent last year.

McDonald’s Corp. and Yum China Holdings Inc., which operates Pizza Hut and KFC in the country, have also announced restaurant closures in areas near the center of the outbreak. Starbucks, however, appears to be carrying out a broader suspension of activities than its counterparts.

China and the U.S. are the most important markets for Starbucks as the Seattle-based chain seeks to recapture its rapid growth of past years. The results show the strategy is paying off -- with higher customer traffic in the two nations particularly encouraging.

The coronavirus, of course, will be the wild card in whether Starbucks can maintain its pace. The company is expanding aggressively there, with global store growth of 6% in the quarter led by China, where the chain has more than 4,000 locations. Starbucks said it couldn’t “reasonably” estimate the impact of the coronavirus, but expects the outbreak to “materially affect” fiscal second-quarter and full-year results.

Operating margin expanded in the quarter to 17.2 per cent, compared with 15.3 per cent a year ago. While higher sales and supply-chain savings helped, the company is still facing higher wage and employee benefits costs.