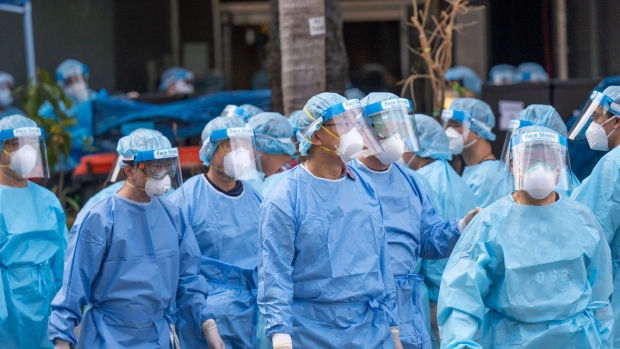 (Bloomberg) -- After avoiding Covid for months, Hong Kong is grappling with an outbreak caused by a novel twist on omicron that’s rare -- but on the rise -- throughout the world.

More than 200 people have been infected with the ‘stealth’ variant, which has been traced back to a traveler infected by the strain during a 21-day hotel quarantine, according to the government. It’s one of the largest outbreaks in the city, which has taken increasingly drastic steps to stamp out the disease -- from locking down thousands of residents, banning flights from countries including the U.S. and U.K., to killing thousands of hamsters after some of the pets tested positive.

While little is known of the BA.2 omicron sub-variant, including whether it’s more infectious or deadly, it’s widely considered harder to detect because of its unique genetic traits that make it difficult to distinguish from other Covid variants. The Hong Kong government is concerned the strain could double the number of cases in two to three days, making it a particular threat to the city, which is densely populated but has one of the lowest vaccination rates among developed economies, according to Bloomberg’s vaccine tracker.

In the Kwai Chung public housing estate, about 5,000 people have been confined to their apartments in two of the estate’s 16 blocks since last week, while the emergence of new cases resulted in a third tower being locked down on Tuesday, according to the South China Morning Post.

While Hong Kong’s strict Covid-Zero policy was successful in keeping out the deadly delta variant last year, the strategy is exacting an economic toll as the city becomes increasingly isolated from the rest of the world.

The city is not alone in fighting the omicron sub-variant, which is being closely monitored by the World Health Organization. It has also accounted for almost half of new omicron cases in Denmark in mid-January, according to that country’s Ministry of Health.

Not much is yet known about stealth omicron, including how transmissible it is or whether it evades vaccines better, but WHO is investigating whether to make it a separate variant of concern.