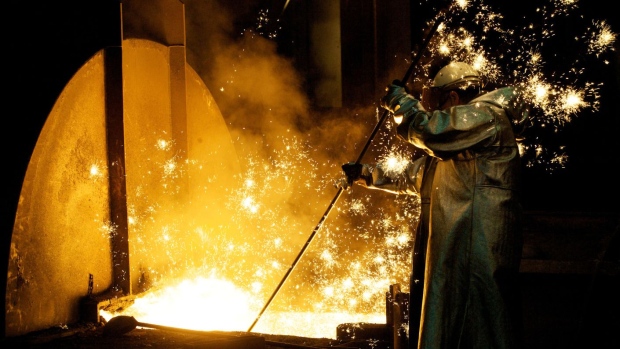 (Bloomberg) -- British researchers have found a way to cut emissions of planet-warming carbon dioxide from steelmaking — and save money too.

Steel production accounts for about 7% of the world’s carbon emissions. It’s also fiendishly difficult to decarbonize due its reliance on coking coal to turn iron ore into its raw metallic form.In a paper published in the Journal of Cleaner Production this month, scientists at the University of Birmingham in England proposed using a form of the mineral perovskite to recycle the carbon dioxide that steelmaking blast furnaces produce. If they can make it work at a large scale, the process could drastically cut the industry’s emissions, without the need for expensive new equipment or machinery.

“We can almost completely close the loop. All of those harmful gases that were being released into the atmosphere are now being used for something useful, just recycled within the system,” said Harriet Kildahl, lead author of the study.

Currently, the most widely touted alternative to traditional steelmaking uses hydrogen, produced with renewable electricity, to turn iron ore into iron. It’s a process that’s been known for decades, but steelmakers are only just beginning to invest in it due to its prohibitively high costs.

The perovskite mineral the researchers examined can turn carbon dioxide back into carbon monoxide, which can be cycled back into the blast furnace as an alternative to coking coal. That would substantially cut the cost of the process, and make it far cheaper than hydrogen-based processes.

Crucially, the technology can also be retrofitted onto existing blast furnaces, cutting emissions by about 90% and avoiding the huge new investments that hydrogen-based steelmaking requires.

A perovskite is a type of crystal, made in this case from niobium, calcium carbonate, iron ore and barium carbonate. Perovskites have also been proposed as new forms of fuel and solar cells.

Niobium, regarded as a critical mineral, is only mined in Brazil and Canada, leaving major countries including the US and China reliant on imports. Currently, it is used in steel alloys, including to make cars lighter and more fuel-efficient.

“From a cost-effectiveness aspect, for reducing stranded assets, this will be a lot faster than the other routes,” said Yulong Ding, a professor at the University of Birmingham and co-author of the paper.

The method has been demonstrated in a laboratory but not at a commercial scale, which will be critical to proving its viability. Challenges include finding a material that can replace coking coal’s structural role in the blast furnace. Commercial demonstration plants could be possible within five years, the authors said.

(Updates with details on perovskite in the 8th and 9th paragraphs)