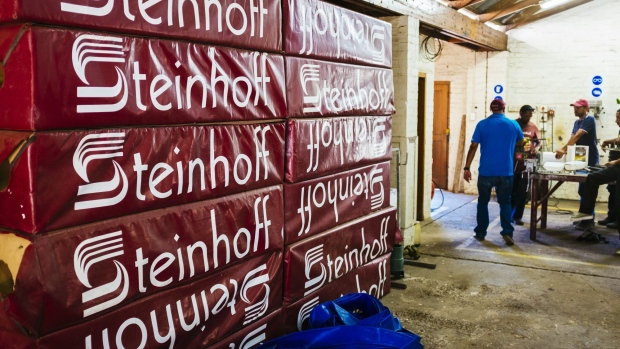 The plans will help the South African company step up a rebuild after winning approval to pay out about 1.5 billion euros ($1.7 billion) to investors after an accounting scandal in late 2017.

Steinhoff released its annual report on Friday with an unqualified audit opinion -- the first time since the scandal broke that it’s met the regulatory deadline and obtained a clean audit. The document showed the company is still saddled with 9.8 billion euros of debt, about the same as 12 months earlier.

“We have to bring the absolute value of the debt down, so we’ll have to sell further assets,” Chief Financial Officer Theodore de Klerk said in an interview. “The quantum is just a bit too high to restructure as it is at the moment.”

Steinhoff can reduce its near-79% stake in Pepco, which started trading in Warsaw last year, and publicly sell shares in both U.S. bedding chain Mattress Firm and Fantastic Holdings, an Australian lower-priced furniture and bedding retailer.

Selling more of Pepco is the easiest move and Steinhoff will likely do this in 10%-15% chunks, De Klerk said. The company has no minimum level it will hold onto, he said.

Steinhoff is likely to wait for better conditions before doing any of these three sales. Global markets are currently volatile with the prospect of tighter monetary policy in the U.S. and rising geopolitical tension over Ukraine.

Steinhoff will also assess whether to give up a majority ownership of pan-African clothes retailer Pepkor Holdings Ltd. The firm sold a near-10% stake to help fund a deal with creditors and will distribute Pepkor shares to claimants as part of the legal settlement.

In the meantime, Steinhoff is talking with lenders about extending the debt maturity and reducing its 10% interest rate to one that’s more “market related,” De Klerk said.

“When these debt agreements were negotiated this company was anything but stable,” he said. “That’s changed now, so you need to engage with people and see where one can end up.”