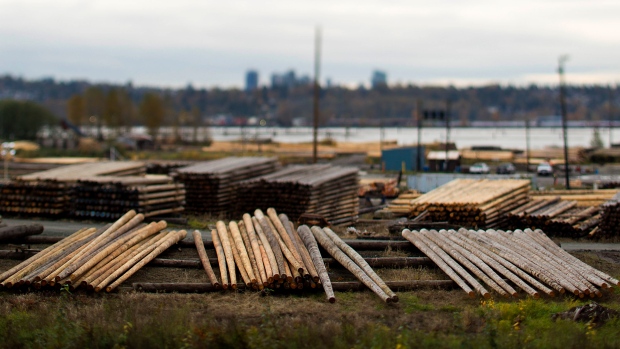 Logs sit piled up in this photo taken with a tilt-shift lens at a Stella Jones timber yard in Vancouver, British Columbia, on Thursday, Nov. 10, 2011. , Brent Lewin/Bloomberg

MONTREAL -- Stella-Jones Inc.'s (SJ.TO) second-quarter sales revenue was down slightly from a year ago but the Quebec-based manufacturer of treated wood products says it's pleased with the results given short-term challenges that it faced.

Sales dipped to $661.8 million from $662.3 million, boosted by an $18.2 million positive impact from currency conversion.

Stella-Jones says the quarter's challenges included temporary delays in shipments of railway ties and the impact of wet weather on sales of residential lumber.

Sales of utility poles, on the other hand, were up due to higher sales prices, increased volume and the currency effect.

Analysts had estimated $682.8 million of revenue and 80 cents per share of adjusted net income, according to financial markets data firm Refinitiv.