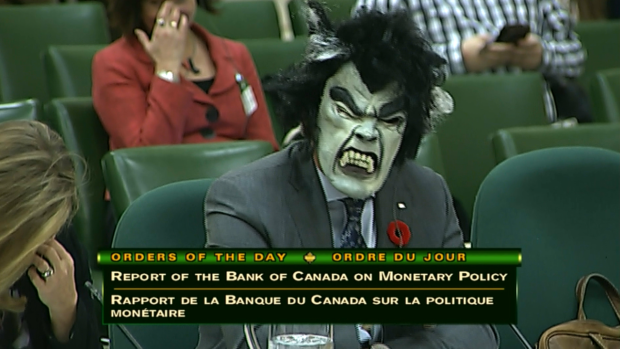 Members of Canada’s Standing Committee on Finance got into the Halloween spirit early during the normally staid testimony of Bank of Canada Governor Stephen Poloz.

After nearly an hour of asking Poloz about the state of Canada’s economy, high household debt and the potential impact of the termination of NAFTA on Canadian business, Dan Albas, the Tory lawmaker representing Central Okanagan – Similkameen, used his last question to ask about “other markets” and inflation.

“Do you think a lower cocoa bean price will cause more consumption by Canadian households in chocolates and will in turn create inflation in the job market for dental hygienists, increasing inflation and ending up with kids with cavities? Do you think we should cancel Halloween?” Albas asked.

Before answering, Poloz donned a full Halloween monster mask from his briefcase and told the committee: “You cannot cancel Halloween.”

BOC Gov. Stephen Poloz gets into the Halloween spirit pic.twitter.com/ad0MWh5zV8

Poloz told the committee he was carrying the mask to show his grandchildren later that evening.