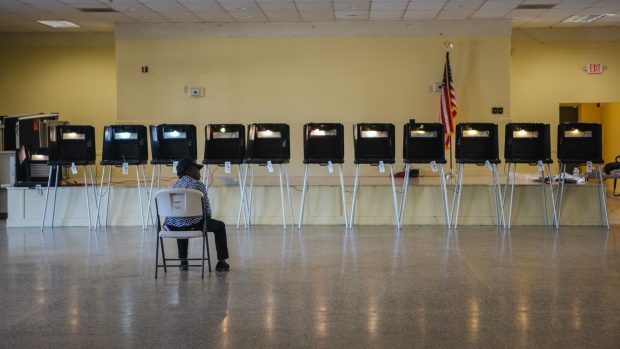 An election official sits in a chair while waiting for voters to arrive at a polling station in Miami on March 17. Photographer: Jayme Gershen/Bloomberg , Bloomberg

(Bloomberg) -- The U.S. economic stimulus package will include $400 million in election assistance as states grapple with 2020 voting amid the coronavirus pandemic, according to two people familiar with the bill.

The funds can allow states to increase the ability to vote by mail, expand early voting and on-line registration and make in-person voting safer by allowing states to create additional voting facilities and increase the number of poll workers, according to a Senate aide who has seen a summary of the legislation but declined to be identified discussing the matter.

The Trump administration struck a deal early Wednesday with Senate Democrats and Republicans on an historic rescue package with more than $2 trillion in spending and tax breaks to bolster the hobbled U.S. economy and fund a nationwide effort to stem the coronavirus.

The bill does not create a national requirement for voting by mail, which Republicans objected to.