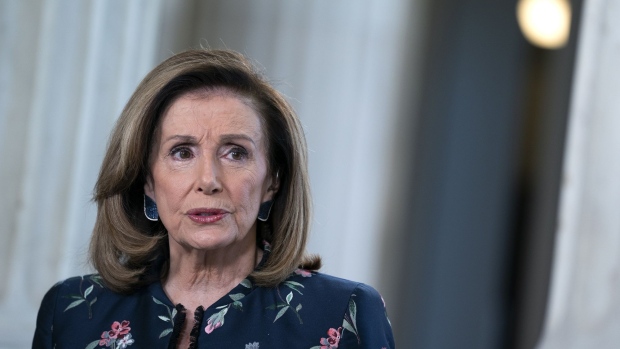 The fate of additional stimulus for the U.S. economy before next month’s election will be decided this week, with House Speaker Nancy Pelosi setting a Tuesday deadline to reach an agreement with the White House -- though it remains doubtful that the Republican-controlled Senate will accept any deal they strike.

President Donald Trump said he’s ready to match the US$2.2 trillion spending levels demanded by Democrats -- or go higher -- despite repeated warnings by Senate Majority Leader Mitch McConnell that most GOP senators will oppose any coronavirus relief package that big.

“I want at a bigger number than she wants,” Trump said of Pelosi during a campaign stop Sunday in Reno, Nevada. “That doesn’t mean all the Republicans agree with me, but I think they will in the end.”

But the price-tag isn’t the only obstacle. Pelosi said Sunday on ABC’s “This Week” that the two sides are still haggling over language on a national plan to control the virus. Differences also remain on several key issues, including aid to states and GOP demands for an employer liability shield, that have stalled a deal for months.

Tuesday’s deadline “only relates to if we want to get it done before the election, which we do,” Pelosi said, indicating they could continue talking about passing a stimulus measure after Nov. 3.

While Pelosi and Treasury Secretary Steven Mnuchin and their staffs press on with negotiations, McConnell is moving ahead with $500 billion Republican-only plan that would renew a small business loan program and provide expanded unemployment benefits, school aid and money for virus testing, among other provisions.

McConnell plans votes Tuesday on a standalone bill to give the Paycheck Protection Program more funding, and Wednesday on the other measures. Democrats are almost certain to block action.

Despite the standoff, and recent data showing the economic recovery is slowing, markets so far mostly have shrugged off Washington’s inability to act. The S&P 500 share index closed little changed on Friday, while still notching its longest weekly advance since August.

Trump now has upped his administration’s ante in the talks and continues to express confidence that reluctant Republicans will follow his lead. If Pelosi would go along with the administration’s offer, “I think they would too on stimulus,” he told reporters in Reno. “So let’s see what happens.”

Still, McConnell’s decision to go forward undercuts Trump’s call for Congress to “go big or go home!” While he said in a statement Saturday that the Senate “would of course consider” any deal reached between Pelosi and the White House, McConnell gave no sign of relaxing his opposition to a large-scale relief package.

Pelosi was dismissive of McConnell’s remarks that the Senate would consider whatever comes out of negotiations, saying, “that is among his many statements” about a pandemic relief plan.

With Trump trailing Democratic presidential nominee Joe Biden in polls and potentially dragging down some Republican incumbents, the president’s ability to sway the GOP may be diminished.

Even if there’s a breakthrough this week, there’s a very narrow window to overcome Republican opposition to any relief plan in the US$2 trillion range, and to get a bill written and passed before Election Day.

Pelosi has said she doesn’t want to wait until January for legislation to bolster the still-struggling U.S. economy, but that might mean settling for a smaller package in the lame duck session of Congress between the election and inauguration.

The outcome on Nov. 3 will also have a major impact on what comes next; a big question is what Trump might do after the election. It’s uncertain how he’d approach talks if he loses to Democrat Joe Biden, or whether he could drive a harder bargain if he’s re-elected.

“Anybody who would want to predict what President Trump will or won’t do is doing so at their own risk,” said former Republican House Speaker John Boehner.

Boehner, now a senior strategic adviser at lobbying and law firm Squire Patton Boggs, said if Trump wins it’s likely that a smaller stimulus bill will be included in government funding legislation that has a Dec. 11 deadline.

“If Joe Biden wins the election they’ll hold off on a stimulus bill of any size until after the inauguration, and then you’re likely to see a rather large stimulus bill pass the Congress and get signed into law,” Boehner said Friday during a virtual event on the post-election outlook held by his firm.

Mnuchin and Pelosi spoke at length Saturday night and agreed to speak again on Monday, according to Treasury spokeswoman Monica Crowley. Their staffs were due to keep talks going in the meantime.

The pair had been making progress on the issue of a national Covid-19 testing strategy, a key issue for Pelosi. But the speaker told House Democrats in a letter last week that “many other disagreements remain.”

Those include proposals for aid for state and local governments -- long a sticking point for Republicans, who’ve called it a bailout for Democrats -- tax benefits for families, support for vulnerable small businesses, and child care aid.

Pelosi, meanwhile, continues to oppose liability limits for employers, designed to shield them from coronavirus-related lawsuits as they reopen, one of the provisions McConnell has been insisting on inclusion in any stimulus.