Stocks posted their biggest decline in a month amid concern that the global economic recovery will lose momentum with further shutdowns to contain a coronavirus resurgence.

Traders watched closely Federal Reserve Chair Jerome Powell’s remarks during a town hall with educators and students, where he noted the central bank’s “powerful tools” have limitations. Powell also said that COVID-19 will likely stay “for a while,” and we’re not going back to a pre-pandemic economy. Policy makers will gather next week for the Jackson Hole symposium, the Fed’s most-prominent annual conference.

“We’re essentially in a bit of a holding period ahead of Jackson Hole,” wrote Craig Erlam, senior market analyst at Oanda Europe. “While there is a fair amount of data releases this week, some of which may carry a little more weight than others, it’s all about the Fed in these markets at the minute, and that’s unlikely to change unless the delta situation gets dramatically worse.”

The S&P 500 snapped a five-day rally. Giants Tesla Inc. and Facebook Inc. slid at least 2.2 per cent, while Home Depot Inc. tumbled after the retailer posted weaker-than-expected results. Chinese stocks listed in the U.S. such as Alibaba Group Holding Ltd., Baidu Inc. and JD.com Inc. faced another wave of selling as authorities in Beijing ramped up their crackdown on some of the nation’s largest companies. 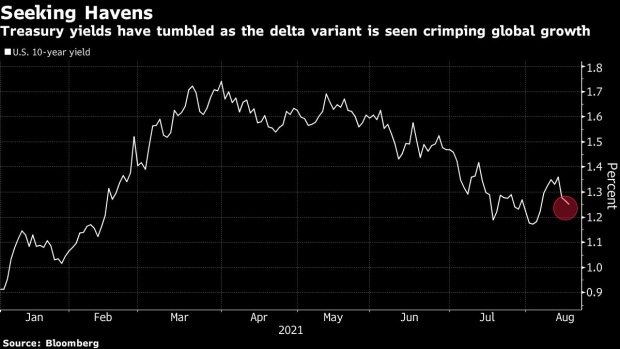 American homebuilder sentiment sank to a 13-month low in August amid high costs as well as continuing supply shortages. U.S. retail sales fell in July by more than forecast, reflecting a steady shift in spending toward services and indicating consumers may be growing more price conscious as inflation picks up. While factory production strengthened the most in four months, manufacturers continued to face higher input prices and a near record number of job vacancies.

The U.S. government is poised to offer coronavirus booster shots as soon as next month, with the country facing a renewed wave of infections fueled by the delta variant. New Zealand will enter a lockdown after reporting its first community transmission since February. Switzerland recorded its biggest jump in infections in months, while South Africa expects a fourth wave to start in early December.