Stocks tumbled around the globe as recession fears resurfaced, with the Federal Reserve struggling to get on top of inflation that has proved more persistent and widespread than officials anticipated.

The S&P 500 closed at its lowest since December 2020, while the tech-heavy Nasdaq 100 sank 4 per cent. The deal spread on Elon Musk’s proposed takeover of Twitter Inc. widened as the billionaire wasn’t directly asked and didn’t address the issue on whether he’s committed to buying the social-media firm during a staff meeting. Homebuilders slid as mortgage rates jumped the most since 1987.

The dollar fell as central banks in Europe stepped up monetary tightening, promising to narrow the gap between rates there and in the US. Treasuries rebounded from an earlier selloff. Bitcoin slid below US$21,000, heading toward its longest slide in Bloomberg data going back to 2010.

Declaring that it’s essential to tame inflation, Jerome Powell engineered the biggest rate increase since 1994 Wednesday and held out the distinct possibility of another jumbo hike in July. While the Fed chief sought to soften the blow of the 75-basis-point boost, saying he didn’t expect such moves to be the norm, he tacitly admitted the chance of an economic downturn.

“We’re worrying about growth and where the Fed takes us ultimately,” said Chris Gaffney, president of world markets at TIAA Bank. “Yesterday everybody said, ‘Oh good, the Fed is doing something aggressive, they’re going to get aggressive, they’ll try to catch up to the inflation curve.’ But now, you’re looking at it and saying, ‘Yeah, but are they chasing something they’re not going to be able to catch?’” 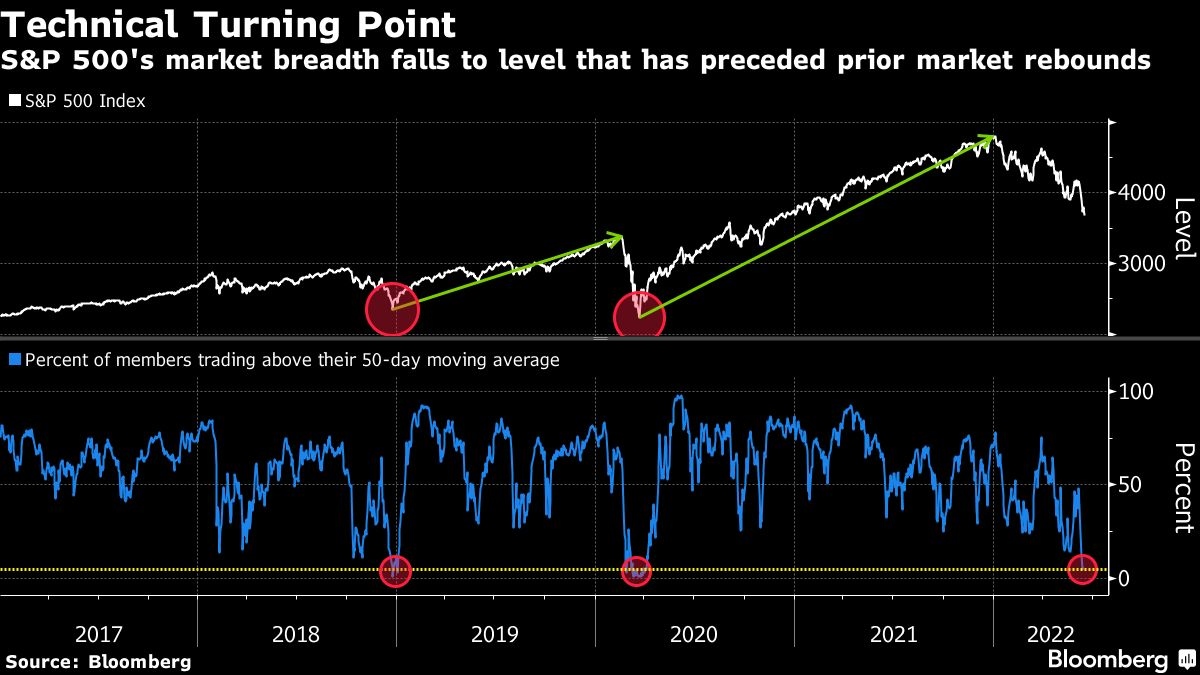 While inflation is “out of control,” the Fed is doing the best it can given its limited tools, Orlando Bravo, co-founder of private-equity firm Thoma Bravo said. Despite the stock carnage, valuations still have much further to fall, according to Jim Chanos, founder of Chanos & Company LP.

The S&P 500 now implies an 85 per cent chance of a US recession amid fears of a policy error by the Fed, according to JPMorgan Chase & Co. The warning from quant and derivatives strategists is based on the average 26 per cent decline for the gauge during the past 11 recessions and follows its collapse into a bear market.

One technical indicator of US stocks shows the extent of the recent slump, while offering a whiff of optimism that it will soon come to an end.

The percentage of S&P 500 members that are trading above their 50-day moving average sank below 5 per cent this week, the lowest level since COVID-19 fears battered shares more than two years ago. Both that selloff and the one that hit markets in late 2018 reversed course shortly after seeing a similar share of stocks dip below the closely watched technical average.

Elsewhere, investors dumped European bonds and the franc rallied after a surprise Swiss rate hike. The pound rose as the Bank of England raised rates and signaled it’s prepared to unleash larger moves if needed. Currency options traders are betting the Bank of Japan will deliver a policy surprise this week.