U.S. stocks rose in choppy trading as investors digested the latest batch of corporate earnings and data that showed the American economy gained steam in the first three months of the year.

Apple Inc. pared a a gain of as much as 2.6 per cent amid concern that the iPhone maker may not sustain growth after a blockbuster quarter as it faces a tightening supply of chips. Weak earnings dented Ford Co. and EBay Inc. Facebook held its post-earning gains, surging to a record after after its sales dwarfed estimates.

The S&P 500 was at a record high after briefly turning negative in afternoon trading. The tech-heavy Nasdaq 100 was set to break two-day losing streak after fluctuating between a gain of more than 1 per cent and a 0.5 per cent decline. The volatility came as investors continued to assess major corporate results that overshadowed signs of a resurgence in the economy. Data released Thursday showed U.S. gross domestic product expanded at a 6.4 per cent annualized rate in the first quarter, while applications for U.S. state unemployment insurance fell last week to a fresh pandemic low.

Ford plunged the most in 10 months after reducing its full-year forecast, also because of a chip shortage. EBay tumbled the most since 2016 on a sales outlook that suggested spending on the site could recede as more people get vaccinated.

“It looks like it’s a tug-of-war between those that think the good earnings results we’ve seen are just the beginning of a longer economic and corporate earnings boom and those that believe we are at peak growth and markets are unlikely to go higher from here,” said Chris Zaccarelli, chief investment officer at Independent Advisor Alliance.

While the GDP figures may support the Federal Reserve’s strong assessment of the economy, the central bank is in no mood to halt aggressive support as it looks for even further progress in employment and inflation. Chair Jerome Powell on Wednesday dismissed worries about price surges or anecdotes of labor shortage, implying policy makers are prepared to run the economy hot for a while. President Joe Biden unveiled a US$1.8 trillion spending plan targeted at American families, adding to the economic optimism. 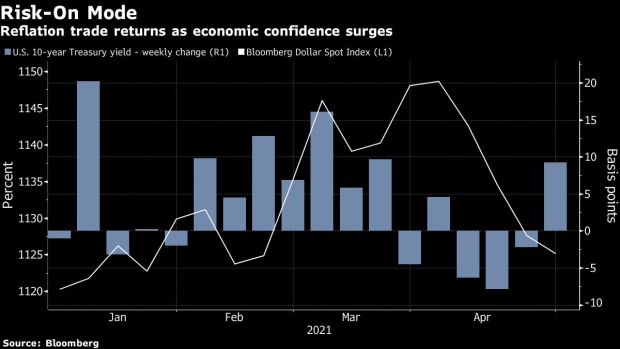 With their plans, the Fed and Biden have delivered a boost to investor sentiment that has see-sawed in recent days between optimism over a string of robust economic data and caution amid high valuations and speculation about stimulus tapering by year-end.

“All evidence still points to continued support from both fiscal and monetary policy against a backdrop of accelerating corporate earnings,” said Mark Haefele, UBS Global Wealth Management’s chief investment officer. “This reinforces our view that markets can advance further, with cyclical parts of the market -- such as financials, energy, and value stocks -- likely to benefit most from the global upswing.”

Crude oil rose on a confident outlook on demand from OPEC and its allies, despite the threat from India’s COVID-19 crisis.